In our recent discussions related to the stock market’s somewhat tumultuous start to the year (see here, here and here) as well as our thoughts about what might happen in 2016, we have highlighted oil as one of the key factors driving the market’s performance. In fact according to this article, since December there has been a nearly 90% correlation between oil and stock prices. In other words, when oil prices have fallen, stocks have declined and when oil prices have stabilized, stocks prices have tended to increase. This is certainly not normal. Historically, low oil prices have been good news for consumers and, correspondingly, for the markets; and high prices have had a negative impact on equities.

When we last talked about the oil market, we provided an example of the poor track records the so-called “experts” have of correctly forecasting oil price movements. Since peaking at about $107 per barrel in June 2014, oil prices have moved mostly lower. Recently, they fell below $27 per barrel, their lowest level since May 2003. You would be hard pressed to find a single analyst who correctly predicted the market’s movement during this period. In fact, this illustrates oil’s unfathomability – no matter how many experts study every detail of the oil market, oil confounds time and time again. 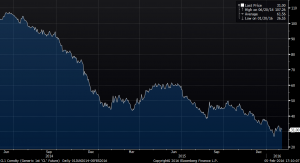 The price decline in the above chart was precipitated by Saudi Arabia’s decision to essentially flood the market with oil, rather than cut its own production in an effort to keep supply and demand more balanced. The goal was likely to crush a number of its rivals and protect the country’s global market share. This strategy worked in the mid-1980s, as the Soviet Union, in particular, was hurt by falling oil prices (they fell 65% in 1987). Apparently, the Saudis were looking for history to repeat itself. However, the market has not responded as anticipated.

Despite oil’s low prices, the market continues to be oversupplied. As shown in the following two charts from the International Energy Agency’s Oil Market Report, supply continues to outpace demand (in 4Q15 supply was 96.88 million barrels per day (mb/d); demand was 95.05 mb/d). In addition, both demand and supply continue to trend higher. With Iran now free to sell oil in the global marketplace, supply may continue to rise, absent further production cuts from other oil producers.

If you look closely at the graph on the right, you will note that with the exception of 2015’s first quarter, supply has moved steadily higher. It has also outpaced demand in each of the last eight quarters. The result is that oil inventories continue to accumulate, placing further downward pressure on prices. In short, increased supply is a primary driver of oil’s price increase.

Normally, one would expect the stock market to rally when oil prices fall. After all, the result is lower gasoline prices, which should provide consumers with more money to spend on other items. However, consumers have not followed through. Based on the information we have seen, consumers are driving more, so some of their savings are going right back into their gas tanks. Many are also confronting higher healthcare costs. In addition, overall savings rates have increased.

At a recent conference we attended, a speaker suggested that as oil prices fell to about $50 per barrel, it was good for the markets. However, below that level, the impact becomes more detrimental. With oil around $30 per barrel today, many oil companies have sharply lowered their capital spending budgets (estimates are they have been reduced by a few hundred billion dollars). Lower spending affects companies outside the oil industry as well as those in it. For example, industrial companies that provide equipment to the industry see their businesses fall off. Recently, we even heard a social media company mention that lower spending by oil & gas companies had a negative impact on its 2016 outlook.

At some point, we expect these trends to reverse. It is important to remember that oil is a depleting asset. This means that over time, production from a given well will decline. The number of onshore drilling rigs in the U.S. is at its lowest level since 1999. At last count, 7% of oil producers have declared bankruptcy in the current downturn. More are expected to follow. That will likely cause supply to fall even more.

Ultimately, we expect oil prices will move higher. We do not expect them to return to the $100 level anytime soon, if ever. But, no one really knows for sure. While we continue to hold shares of some energy companies in client portfolios, we have reduced allocations in the face of the difficult conditions the industry is facing. Our investments in energy companies emphasize those with the strongest balance sheets and the best cost structures. Such companies should be best positioned to perform well over the long term.