A Look at the U.S. Economy

January was certainly a turbulent month for investors. The S&P 500 Index declined 5.1%, its worst month since August. Daily stock-trading volumes were above normal levels, as the most shares changed hands since August 2011. Of course, two weeks ago, the picture looked a lot worse as stocks had one of their worst starts ever to the year before rebounding from their lows over the last two weeks.

One of the factors weighing on the stock market has been concerns about the uneven economic recovery in the U.S. On Friday, it was reported that the U.S. economy grew an anemic 0.7% in the fourth quarter. 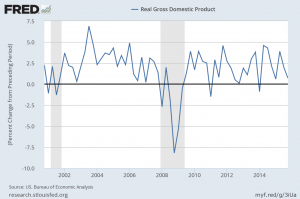 For all of 2015, the economy expanded 2.4% from 2014. This was a little better than its average growth of 2.1% since 2010, the first full year of the current expansion. Overall consumer spending grew 3.1%, its fastest pace since 2005, even though households pulled back a little toward year end.

In what could be seen as another example of the market reacting positively to bad economic news, the weak fourth-quarter GDP figure could have helped the market surge higher on Friday. In the eyes of many, the weak growth makes it less likely that the Fed will raise rates again in March. In fact, as it stands now, futures markets anticipate only one additional rate hike by 2016’s end. Not long ago, expectations were that the Fed would increase rates on four different occasions during 2016. However, with the exception of the December jobs report (which suggested robust hiring continued all the way through 2015’s end) U.S. economic data has been disappointing since policy makers raised the Fed’s short-term interest rate. Inflationary pressures, particularly in the face of low gasoline prices, remain benign as well.

The GDP report did contain some positive news. Consumer spending remains a positive force, benefiting from a combination of improving labor market conditions and stronger purchasing power due to the decline in gasoline prices. This helped consumer spending rise 2.2% in the fourth quarter. Despite some uncertainty, consumers are in a much better position at this stage of the business cycle. Household balance sheets have strengthened and credit availability has improved. The strong job market also helped push Americans’ overall taxable income up by 3.2%, at an inflation-adjusted annual rate. However, they chose to bank much of their gains, raising the personal savings rate to 5.4%, its highest level since 2012.

Much of the slower pace of growth can be attributed to the second consecutive quarterly decline in inventories. In fact, lower inventories knocked 0.45 percentage points off of headline gross domestic product (GDP).

The inflation story has not changed much. Since the 1990s, overall inflation has remained modest despite the expansion of the Fed’s balance sheet through quantitative easing and decades of financial turmoil. In the fourth quarter, overall inflation was 0.8% with sharp drops in export and import prices.

Based on the modest GDP growth and continued benign inflation it seems unlikely that the Fed will raise rates in March. Lingering concerns about a more severe slowdown in China may also make the Fed more cautious. While we have questioned in the past how meaningful the Fed’s actions really are, we expect there will be much discussion about whether or not the Fed will raise rates in March.

Against this backdrop, we are working diligently to apply our investment process to find opportunities to add financially strong, well-managed companies that are trading at a discount to our estimate of fair value to client portfolios.