A Look at the Year That Was, and Thoughts About the Year Ahead

For much of the year’s first half, 2015 looked a lot like 2014, as returns were somewhat in line with long-term averages. However, as the year progressed, the S&P 500’s performance became more uneven. On August 24, the market tumbled, leading to the S&P’s first correction (a decline of 10% or more) in nearly four years. The market subsequently recovered from its lows, but it has yet to surpass its previous peak. Overall, the U.S. indexes were little changed. The market’s seesaw behavior came amid pressure from slower growth in China, plunging oil prices and ongoing concerns about the potential for interest-rate increases. These events led to considerable investor angst and heightened market volatility.

Among the predictions of market pundits for 2015 (and how they went awry) were the following: 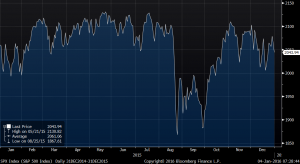 Looking forward to 2016, we are reminded that those who attempt to predict the markets for a living have about the same chance of being correct as we do of guessing a coin flip’s outcome. Forecasting what might drive returns is even harder. In 2015, the world was “awash in oil” with oil prices hitting intraday lows not reached since July 2004, keeping earnings and revenue growth at bay. Companies had difficulties growing their revenues, which led to them striking $4.6 trillion of takeover deals in 2015, surpassing 2007 as the biggest year ever for such transactions, according to Dealogic. U.S. corporations were at the forefront of such activity, agreeing to $2.3 trillion in deals – also a record.

The aforementioned debate about when the Fed would start raising rates also weighed on the markets. Since we are not clairvoyant, our best guess as to how the market might perform in the year ahead involves looking at long-term performance: Historically, the S&P 500 rises about 80% of the time on an annual basis; it has delivered an average return of nearly 13% in the post-war era.

In the U.S., the Fed is expected to gradually increase rates in 2016; higher rates are a sign of economic strength. Historically, the combination of the start of a period of higher interest rates and economic growth has typically benefited the market. The biggest wildcard appears to be whether or not prices will start to rise (inflation). The decline in the unemployment rate to 5% from a 26-year high of 10% in 2009, is raising expectations that wages will grow, which could boost demand and push prices higher. Worries about the economies of Europe, Russia, Japan, and most emerging markets; continued oil price weakness; and slowing growth in China— and the related potential implications on credit and currency markets—remain a concern. Of course, at this time next year, we would not be the least bit surprised if we found that something entirely different than the events we have raised drove the market’s performance in 2016.

To be perfectly honest, we know that forecasting the market’s performance is largely a futile endeavor. We are comfortable maintaining our view that over the long term the markets should move higher. Over the short term, however, we really cannot say with a high degree of confidence what might happen. But, if pushed to provide a view, based on the market’s historical track record, our 2016 forecast is up, not down, for the U.S. stock market. We think interest rates will move higher and market volatility will increase.