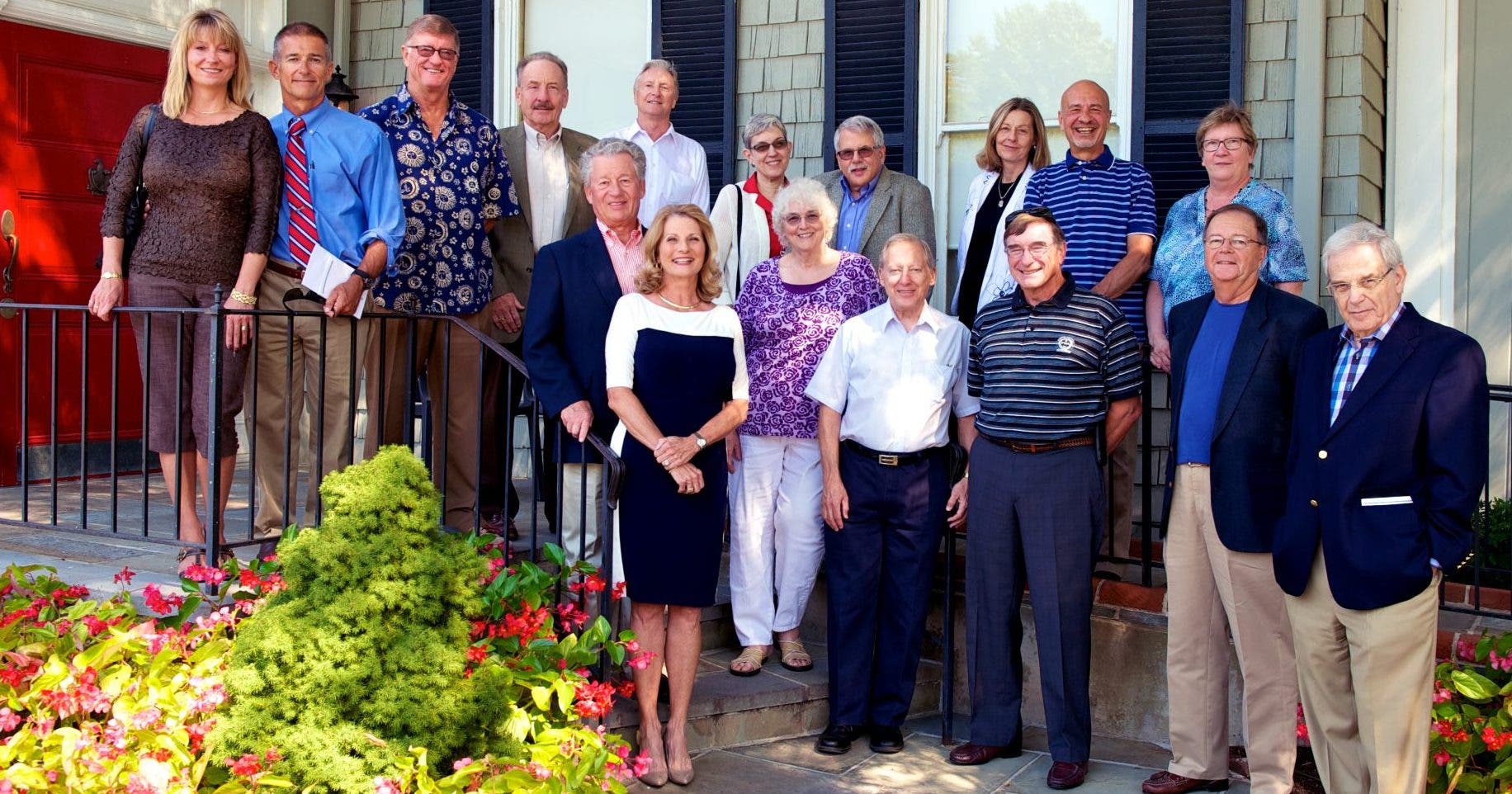 Dr. Steve Carr is a physicist at Johns Hopkins University Applied Physics Lab, where he has been employed since 2001. For the twenty years prior to that, Steve was a career Air Force officer. Steve married Cindy in 2009, and they live in Fulton with their two children, and their wildly popular dog, Bella. Cindy has been working at the Applied Physics Lab for 20 years as a program office administrator. She enjoys reading, hiking and spending time with her two wonderful children, and her husband. Steve is originally from New Hampshire, and Cindy is a native Marylander.

A native of Cleveland, Mary is a retired RN with Bachelor degrees from Bluffton College and Ohio State and worked in home care nursing before transitioning to case management. At home, Mary is kept busy with two dachshunds and a life that includes theater, concerts and movies for entertainment, running (for exercise rather than glory), and skiing (at a timeshare in Vail). Travel (both air and road) is also an increasing part of her life as she enters retirement.

Kelly was a Principal Professional Staff Engineer with The Johns Hopkins University Applied Physics Lab, where he is involved with research and development for the US Navy. He is, quite literally, a rocket scientist! He joined APL immediately after graduating from Carnegie Tech in Pittsburgh, Pennsylvania with bachelor’s and master’s degrees in mechanical engineering. While officially retired, Kelly retains a part-time appointment at APL, mentoring younger rocket scientists. Born in Annapolis, he currently lives in Highland, Maryland. Kelly has two sons and two terrific grandkids that keep him on his toes whenever he visits. Kelly is a shutter bug and also enjoys gardening, traveling, downhill skiing and playing softball in the APL league. He loves old sports cars and has been known to occasionally cruise around town in his 1957 Porsche Speedster.

Gary is currently a Group Supervisor and member of the principal professional staff at The Johns Hopkins University Applied Physics Laboratory. He joined APL right after graduating from the University of Wisconsin in 1967 with a Bachelor of Science in Electrical Engineering. In between graduating college and starting work, he married his high school sweetheart, Laurel, who recently retired from teaching and now devotes her time to quilting and their three grandchildren (not necessarily in that order). While working at APL, Gary continued on with graduate school earning a master’s degree in both electrical engineering and later in computer science from The Johns Hopkins University, where he then taught several computer science classes. Gary spends what spare time he has pursuing several passions including golf, photography, and reading. One day soon he hopes to get back to writing children’s stories and woodworking.

Greg managed Real Estate for the Postal Service for 32 years and is currently working on a successful retirement. The biggest challenge is to find time for all the things he wants and needs to accomplish. The best part of this new way of life is that he sets his own priorities and schedule and answers only to his wife Cathy. An interesting aspect of retirement is that he no longer has two lives. His work life and personal time are one and, consequently, there is no need to modify his behavior and priorities based on the time of day and day of the week.

Dennis is a retired Group Supervisor at the Research Center of Johns Hopkins Applied Physics Laboratory (APL), where he worked for 37 years. He graduated with a bachelor’s degree in Engineering Mechanics from Penn State and holds a master’s degree in Civil Engineering from MIT. Dennis and his wife, Suzanne, live in Woodstock on a golf course community that allows him to engage in one of his hobbies–playing golf! In addition to golf, he enjoys tennis, traveling, and spending time with family, especially his two grandchildren. Dennis used to play the trumpet for the APL Brass Choir for 25 years. With approximately ten members, the choir performed at APL for spring concerts and other events, such as the annual Christmas tree lighting and United Way Kickoff.

Russell McCally is a member of the principal professional staff at the Johns Hopkins University Applied Physics Laboratory where he has worked for nearly 45 years and is an Associate Professor of Ophthalmology (part time) at the Wilmer Eye Institute at Johns Hopkins Medical School. He has been a principal investigator on National Eye Institute grants studying optical properties of the cornea and contracts from the Army Medical Research and Development Command dealing with laser eye safety. He holds a B.Sc in Engineering Physics from Ohio State and a Ph.D. in physics from Johns Hopkins. Russ plans to retire soon and have more time to enjoy his interests in photography, cooking, gardening, and travel. He and his wife Mary Louise have resided in Columbia since 1970.

Michael is a Senior Regional Account Manager for Sanofi Pasteur, the vaccines division of Sanofi-Aventis. He has over 25 years’ experience in the pharmaceutical and biological fields. He earned a bachelor of science degree from the University of Buffalo and an MBA from Loyola College. He is raising two boys with his wife, Anne Marie, who is a Software Engineer Manager for Oracle Corp. Their spare time is generally consumed with coaching and shuttling their sons about during baseball, soccer, and basketball seasons. Both look forward to one day returning to their passion for travel.

Pat, who holds a Master of Science in Telecommunication Systems from Johns Hopkins University, spent over 24 years with Verizon holding various positions in the Finance, Retail Markets, and IT divisions. She opted to confidently take an early retirement package offered by the telecommunication company. After enjoying some time off, she is now experiencing the world of working for the government as a contractor.

Brad is currently a vice-president at PNC Equipment Finance, providing financing options for satellite ground terminals for a large multi-national satellite manufacturer. He and his wife Cathy, were raised in the Midwest, but have lived in the Baltimore area since 1975. They have three daughters and presently reside in Sykesville, MD. Brad is also President of the Board of the Warfield Development Corporation, the varsity girls basketball coach at the McDonogh School and enjoys tennis and golf in his spare time.

Bill thinks of himself as retired, but keeps busy with freelance writing and research projects and volunteer activities (as opposed to thinking of himself as an underemployed freelancer). He was a reporter and editor at The Baltimore Sun for more than 30 years, including 12 years as a reporter for the business section. He’s a native of Baltimore. He and his wife, Laura, are empty-nesters in Columbia.

Sue’s life took an unexpected turn in 1990 when her husband Stan died in his late 40s. A widow with sons ages 17 and 21, Sue resolved to be, in her words, “a triumphant survivor.” Using her graduate training in social work and related paid and volunteer experience, Sue joined the Maryland-National Capital Park and Planning Commission, where she designed and implemented the “LifePlanning” retirement program for employees. She retired in 1997 in order to care for her parents, and she now enjoys community activities and has a little get-away house on Maryland’s Eastern Shore. Her sons have followed their father into academic fields: Peter is an astrophysicist at the University of Maryland, and Dan is an economist at Rensselaer Polytechnic Institute.

Paul is the Director of Engineering at L-3 Chesapeake Sciences Corporation. He has worked there for more than 15 years and leads a technical staff of over 45 engineers and technicians. Paul is also the author of AC/DC Principles published by American Technical Publishers in 2007. Paul graduated with a BSEE from the University of Maryland, College Park and received a MES in Computer Engineering from Loyola College in Maryland. Paul lives in Clarksville with his wife, Michele, and their daughter, who is a sophomore at River Hill High School (Go Hawks!). Paul enjoys recording, editing, and producing CDs for different music ensembles at River Hill High School and Clarksville Middle School. As a family, they enjoy listening to music, reading books, going to the beach, hiking, geocaching (a high tech treasure hunt), and biking on the C&O Canal. The family’s near term goal is to own a vacation place at the beach.

David Vasholz continues to work part-time on various research projects in optics and hydrodynamics at Johns Hopkins University Applied Physics Laboratory after having retired from there in August 2008. Prior to his part-time position, David spent 30 years with APL on the principal professional staff. He holds a Ph.D. in Physics from the University of Wisconsin. David currently lives in Columbia with his wife, Hope.

If you have any questions for our knowledgeable advisory board, please contact us at 410-461-3900 or emailus@bwfa.com.