What Is the Market Telling Us?

The first week of the New Year was a rough one for investors. The S&P 500 Index closed lower on each of the year’s first five days. While the S&P 500 is still nearly 3% above its closing low of August 25th, it is down nearly 10% from the all-time high it reached in May. The S&P 500 is also at its lowest level since early October. For the week, the S&P 500 fell 6.0% and the Dow Jones Industrial Average dropped 6.2%, marking the worst-ever five-day start to a year for both indexes.

Clearly, the market at least remains in the correction phase (generally defined as a decline of more than 10%) it entered in late August. What is still unknown is whether or not the S&P will fall into bear market territory (typically viewed as a decline of at least 20%). We do not profess to know the answer to that question with any degree of certainty.

At the same time, it is important to note that corrections and bear markets are expected. Over the long term, we believe the market will continue to march higher and higher. Over the short- to intermediate-term, there are no certainties. If the market only moved higher, then the risk that comes from owning stocks would disappear. Valuations would become more and more expensive. You would typically have little reason to sell one stock and buy another, if you knew that both were going to rise.

While the market does not appear to be excessively overvalued, it is trading above historical norms. For example, the S&P 500’s current trailing price-to-earnings ratio (P/E) is 21.4x (i.e., current price divided by earnings per share over the last 12 months) versus the historical average of 17.5x. On a forward basis, its P/E is 16.8x (current price divided by expected earnings over the next 12 months), compared to a mean of 14.4x. One of the factors contributing to the market’s comparatively high P/E is the low interest-rate environment, which has made investors willing to pay more for stocks. However, corporate earnings have fallen, particularly for companies in the energy and materials sectors who have been hurt by commodity-price weakness. This has increased the market’s P/E. 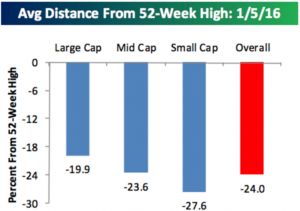 The market’s uneven performance can also be seen by comparing results for the market-cap weighted S&P 500 (down 0.73%) and the equal weight S&P 500 (down 4.11%) in 2015. This represents the weakest relative performance for the equal-weight version of the index since 2007.

Historically, there are not many occasions where a bull market narrowed to just a small group of stocks before everything else rebounded to catch up. In 2015, much of the S&P 500’s performance was concentrated in what The Financial Times referred to as the “Nifty Nine” (Facebook, Amazon, Netflix, Google, Microsoft, Salesforce, eBay, Starbucks and Priceline[i]), which surged more than 60% for the year. We are not saying that the tide cannot turn. Oil prices could stabilize causing earnings to increase and investors to become more confident. The outlook for China could improve. Concerns about heightened geopolitical risk could dissipate. The U.S. economy could remain strong enough to overcome the negative impact of weaker economies around the world.

At the same time, it is important to note that bear markets can happen. Stocks could fall. In fact, since 1950, we have seen a double-digit correction in stocks half the time.

It is also important not to become too discouraged. It is best not to let the market’s recent performance weigh too heavily on your mind. Instead recall the market’s strong gains during the current bull market. It is important that investors stick to their long-term plans. The most successful investors are those that make the best decisions when the market is working against them rather than for them.

Whether the market goes up or down from here, we will remain diligent in applying our process to identify what we believe to be attractively valued, well-managed businesses that can add long-term value to client portfolios.