In many ways, the hardest decision investors have to make is whether (or when) to sell a stock, especially if it is sold at a loss. After all, selling at a loss means admitting that you made a mistake. In economics and decision theory, investors are often said to strongly prefer avoiding the recognition of losses over gains. This tendency is referred to as loss aversion. Most studies suggest that losses are twice as powerful, psychologically, as gains.

If you are a long-term investor, it may be even harder to sell, as you can become “attached” to the stocks you own. In part, this is attributable to the idea that long-term investors do not merely own pieces of paper that represent their share of ownership in a company. Instead, they own a share of a business. Over time they want to see this business grow in value. Sometimes this view can cause you to overlook the warts associated with a particular business.

Recently, our Investment Committee decided to liquidate its position in Plains All-American Pipeline, L.P., (PAA) which we held for a considerable period. The decision to exit was not easy. PAA is well-positioned to benefit from the growth in U.S. onshore oil production. We had confidence in management and the company had a strong track record of delivering returns and meeting its objectives. Plus, it paid a generous dividend that consistently grew over time.

As noted previously, as PAA’s share price fell, the company was a topic of regular discussion at our weekly Investment Committee meetings. We were concerned about the falling share price and oil market fundamentals, but reassured by management’s comments that the dividend was safe as well as the results the company delivered as the year progressed.

However, our perception shifted somewhat radically on January 12. On that date, Plains announced plans to issue $1.5 billion of preferred stock. Management referred to the related conference call as its “’One and Done’ Conference Call.” At first glance, the offering seemed to be a good deal for the company and its shareholders. But, a look at the related presentation gave us pause for concern. As we discussed last week, we think it could take time for oil prices to move appreciably higher. 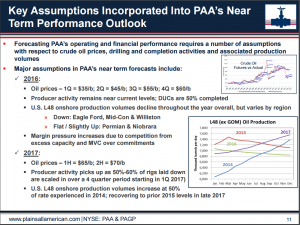 The outlook provided in the above slide is much more optimistic than ours as well as that of the Energy Information Administration, the International Energy Agency and the futures market. We recognize that even those who devote all of their working hours to following the oil markets cannot consistently forecast oil prices correctly. If Plains’ forecast proves to be overoptimistic, then it will likely have to go back to the capital markets to raise more cash. A dividend cut could also be in store.

When we combined the divergence in our oil price view with the following factors, we decided it would be most appropriate to exit the position:

We recognize that the timing of our sale can be questioned because it is after such a sharp decline in the share price. However, our loss of faith in management and our concerns about the oil market and Plains’ outlook in particular led us to conclude that selling the shares would be the best course of action.

We also recognize the financing risk that companies such as Plains face. They cannot use internally generated cash to fund future growth. This means they have to continuously turn to the markets to raise cash via the issuance of either debt or shares. This financing risk has become much clearer to us now than it was previously.

More importantly, we identified two other companies over the past few weeks that we believe have the potential to outperform Plains over the long term. They also have stronger balance sheets and generate better cash flow. This should reduce the level of risk of ownership as well. We will continue to look for other companies similar to those we have added recently, as we think the current market environment is starting to create opportunities for those investors with a long-term focus to add shares of well-managed, financially strong companies at attractive prices.