Time to Take a Deep Breath?

After declining on seven of 2016’s first 12 trading days, the S&P 500 Index closed Wednesday down a little more than 9% year-to-date and almost 13% from its all-time high last May. (It was down nearly 15% from its record high and more than 11% year-to-date at its lowest levels.) Investors are likely breathing a bit easier after the S&P finished the week on a positive note, as increases on Thursday and Friday helped the market end the week higher than it started it.

There is no doubt that this January’s market performance has created much investor angst. Fortunately, we have not read reports indicating that many investors have simply fled the market in response to all the market-related news about doom and gloom. According to Financial-attention-7-29-2015-public, investors with retirement accounts are less likely to check their balances when the market declines sharply than when returns are flat or up. This is emblematic of the so-called “ostrich effect” which holds that investors have a tendency to stick their heads in the sand rather than admitting difficult financial conditions exist.

After all, losing money is painful. Our brains hate pain, and bear markets can cause an overwhelming urge to sell stocks after they have fallen. However, if you understand the historical data, you realize this is not a rational thing to do.

One of the hardest parts about investing is controlling our emotions. Wharton finance professor Jeremy Siegel has said that “Volatility scares enough people out of the market to generate superior returns for those who stay in.” Investors can be their own worst enemies. Countless studies have shown that the average investor meaningfully underperforms the market due to normal behavioral tendencies. We often buy high and sell low as the emotions of fear and greed overcome the need for discipline and long-term planning. The following chart from AdvicePeriod shows estimates of the “Behavior Gap” or the loss that the average investor suffers due to his emotional reactions to market conditions. 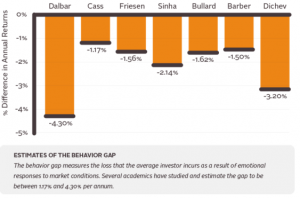 However, it is important to remember that volatility is not a recent phenomenon. The type of drawdown investors have seen in January is actually quite common. The following chart from First Trust indicates that since 1980 the chance of a significant market correction during the course of a year is quite high. While there is no guarantee that the past will be repeated, those who have stayed invested have typically been rewarded for their patience and perseverance. 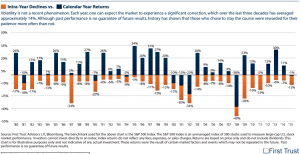 Certainly the pace of this year’s decline has been more rapid than investors have experienced in several years. It is important to remain calm by keeping perspective. After all, “today’s pain can lead to tomorrow’s gains.”

Morgan Housel of The Motley Fool looked at monthly market data dating back to 1871 and found that from 1871-2009 the odds that the S&P 500 would be higher five years in the future – adjusted for dividends and accounting for inflation – are 80%. In other words, if you own stocks today, there is an 80% chance you will have more money five years in the future. However, if stocks have just fallen, the odds of generating a positive return over the next five years are even higher. In fact, the bigger the decline, the greater the odds are of earning a positive future return. 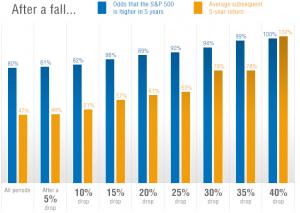 We are not saying that investors should brace themselves for a bear market. We are also not saying that the market’s strong finish last week means that the market will not fall any further. In the current environment, our approach is to remain true to our investment process. At the same time, we know that it is important to assess how the current environment impacts the investment thesis we hold for any of the stocks currently in client portfolios as well as any that we may consider adding.