Market Bears Are out in Full Force

This is easily the worst start to a year for the stock market in history. While we said we expected the market would be more volatile this year, we certainly did not anticipate a start like this.

Whether the market is going up or down, you can always find stories taking a bearish market view. We are not saying that bear markets cannot or will not happen. They do. If you invest in the market for a long period of time, you will encounter bear markets. Some who proclaim doom and gloom for the market are often referred to as “perma” bears because they seemingly maintain their negative views forever. We acknowledge that like the broken clock that is right twice a day, even perma bears will have their moments in the sun. We certainly are not in the perma bear camp.

Being negative all the time is not healthy. It is also unlikely to lead to long-term wealth generation. After all, over longer periods, the market has consistently moved higher. If you review the performance of the S&P 500 over 10-year periods, you will not find many times that the S&P 500’s returns were negative.

Why is it so easy to find stories taking a bearish market view? To be blunt, bearishness sells. It seems to be what the public wants to see in print. Perhaps this is because we often like to reminisce about the past. For example, consider just about any professional sport. As a general rule, today’s athletes are bigger, faster and stronger than their predecessors. However, many fans still talk about the players of yesteryear and how much better they were than today’s players. Maybe they were, but if we are honest about it, we would likely agree that it is unlikely. For example, today there are many more baseball pitchers than there were in the past who can reach the upper 90’s or even exceed 100 miles per hour with their fastballs.

However, we did say that even a broken clock can be right twice a day, so we have to acknowledge that the market bears could be right this time. China and the weak oil markets (if not commodity markets more generally) are certainly contributing factors.

Clearly, China’s economic uncertainty is causing doubt in the rest of the world. China’s economy itself does not directly impact the U.S. that much. However, it is one of the world’s largest economies. It also impacts other economies besides the U.S.’s. Growth in China is slowing. In addition, its economy is transitioning away from infrastructure investment and towards consumption. The corresponding cut in spending should result in China experiencing more years of slowing growth in the future. China has also reduced its expenditures on commodities, which has pressured commodity markets worldwide as well.

In addition, China’s stock market, which is more retail-focused and driven by technical analysis and gambling rather than economic fundamentals has become very volatile. There are also concerns about the stability of China’s financial system.

The movement in oil prices has confounded nearly everyone. It was not that long ago that crude oil was trading above $100. On Friday, crude fell to its lowest levels since 2003. We have talked in the past about how hard it is to predict oil prices. When making forecasts, it is easiest to focus on recent history, so the pundits are getting more and more extreme in their guesses about how low oil prices can go. This week, there were even some predictions that the price could fall as low as $10 per barrel. Will it get there? We do not know. We admit we have been surprised by how far oil prices have fallen (many producers cannot profitably produce oil at current prices).  We have also been somewhat surprised that the price of oil has fallen about another 20% in 2016’s first two weeks. We have been following oil markets closely for a number of years. We recall that in 2008 when oil approached $150 per barrel, there were calls it would reach $200. It never got there. In fact, it fell into the $30s before surging back to $100 just a few years later. 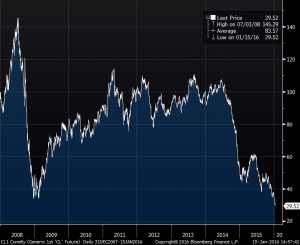 We do not know for sure what is next for the market. It does seem pretty clear to us that the strong rising trend in which the stock market has been for much of the time since March 2009 has been broken. When or how soon it will recover is an unknown. The best course of action to take in times of uncertainty like this is to have a plan and stick to it. Every investor reacts differently to losses. However, it is not necessarily the actions you take that will get you through periods when the market declines. More important is how you react.

Against this backdrop, we remain diligent in the consistent application of our investment process and approach and maintain our allocations to diversified asset portfolios. At its core, asset allocation is about measuring and managing investment risk. Investors should also take heart in knowing that should we enter a bear market, the odds increase that future investment returns will be both positive and will increase at a faster rate.