Forecasting is Too Hard, Especially in the Short Term

Last Monday a colleague sent me an email related to this topic that was virtually unanswerable. The email was qualified with the following statement:

“I know never to ask a PM [portfolio manager] or analyst where the market will be at quarter- or year-end as no one can reliably predict the future!”

It is hard to disagree with that sentiment. At the same time, the colleague was troubled about seeing a great deal of speculation about what might happen in the market in the coming week and was concerned that it could be particularly volatile. This led to a question:

“Obviously lots of data being released will drive the market up/down, but what are your thoughts as to how we look by week’s end?”

The question really is unanswerable. Since BWFA invests with the long term in mind, less thought is typically given to how the market might perform in a particular week or how volatile the market could be. In the past, my role at another firm required that I forecast oil and natural gas prices. A forecast was made, and related analysis for that figure was provided, but to be honest, the projection was little more than a guess. In fact, when asked by others what the forecast was, the response would be couched with the following statement: “The forecast is $xx. However, there is one number I know it won’t be, and that’s whatever I tell you it will be.”

Fortunately, at BWFA we do not have to forecast oil prices. Last June oil traded for over $100 per barrel. Nobody saw the precipitous decline that followed coming. Going into last fall, oil prices had been moving lower, but as the fourth quarter started, the future still looked bright. According to a Bloomberg survey of 36 analysts, oil prices were expected to average $97 per barrel in 2014’s fourth quarter. They would be even higher in 2015’s first quarter. The most pessimistic analyst projected a $91 per barrel average price.

This outlook was not even remotely close to what actually happened. Oil prices had only started to drop. WTI crude, the US benchmark, would plummet from $107 per barrel in June to below $45 in January.

Here is a look at some of the big calls made during the crash and how they have fared. 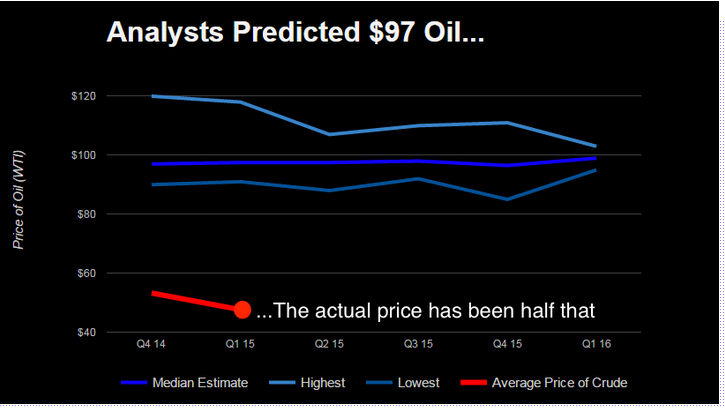 The slide in oil prices brought out the bears, too. Analysts predicted prices would fall as low as $30 or even $20 per barrel. After falling to the low-to-mid $40s, oil prices have moved higher. WTI is currently trading a little below $60.

As can be seen from the oil price example, forecasting is hard. Investors are best served by trying to guess what will happen in the future as infrequently as possible. The value investing approach allows investors to not worry too much about what will happen in a given week, month or quarter. Doing so can be injurious to one’s personal health and well-being. The response I provided to my colleague ended with: “I don’t know. If you really need a response, I can say that at the end of the week, the market will either be higher or lower. I don’t think it will end unchanged.”