Increased market volatility makes it harder for investors to stay the course. Investors have not had to fear volatility much over the past few years as the market went nearly four years between corrections (a decline of at least 10%). However, the market cannot continually move higher. In fact, as depicted in the following chart which includes data through June 30, low double-digit, intra-year declines are more or less par for the course. In presenting this chart, we are not saying that the market will finish the year with positive returns. To be honest, we do not know if the market will move higher or lower from here for the rest of the year. Not even the most brilliant market pundit or prognosticator knows for sure. At the same time, we remain steadfast in our belief that over the long term, the market’s bias should be to the upside. 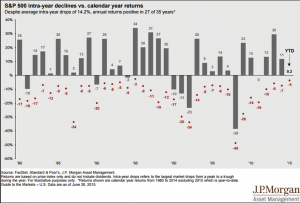 As far back as January we opined that market volatility would likely be higher this year. Not unexpectedly, this call proved a little early as the market (as measured by the S&P 500) meandered for most of the 2015’s first few months. In fact, the market continued to trade within a narrow range until late August.

We at BWFA take comfort in believing that our clients as a group are not overreacting to the market’s increased volatility. In short, our phones have not been ringing off the hook and there have not been panicked calls of the “get me out of the markets” variety.

Across the broader population, there were likely many such calls as, according to the Investment Company Institute, there were more redemptions from equity mutual funds in August’s last two weeks than there have been since the depths of the 2008-09 financial crisis. Many people apparently want out of the market. This is not surprising as the natural instinct for many investors is to sell equities. However, we think that would be a mistake. Selling during a turbulent period will often lock in losses or force you to pay taxes on gains. And, it also raises the question of what do you do with the proceeds. Instead, we favor the words of legendary investor Sir John Templeton, “To buy when others are despondently selling and sell when others are greedily buying requires the greatest fortitude and pays the greatest ultimate rewards.”

It is our belief that rather than exiting the markets, investors should stay the course and seek potential opportunities along the way. It is more important to keep long-term goals in mind and remain on track. At the same time, there could be more volatility ahead.

Emotions are powerful and can negatively impact market returns. At the same time, it is important to remember the logic associated with investing for the long term. While we have only initiated positions in a couple of new equities so far (it takes time to implement our research process and decide whether a stock is attractively valued and appropriate for client portfolios), we are finding more potential investment opportunities than we have in some time. We also note that just because in the past a stock traded at a higher price (and valuation) than it does today does not mean it is currently a bargain. Sometimes individual stocks become overvalued. When making a decision to invest in a security, it is important to fully assess the valuation, the financial strength, the capabilities of management, the quality of earnings and to understand the company’s long-term prospects before deciding to invest. Higher or lower market volatility should not impact our investment process.