More of the Same from the Fed

Last Thursday’s announcement that the Federal Reserve was leaving rates unchanged remains a dominant topic in the financial news. There continues to be considerable hullabaloo about if/when the Fed will eventually decide to start pushing rates higher as well as why it decided to maintain its zero interest rate policy.

Based on the reports we have read, central-bank officials do not think recent global economic and market tumult will take the U.S. economy off course; however, they want to be sure before they decide to push rates upward. At Thursday’s press conference following the two-day policy meeting, Fed Chairwoman Janet Yellen said, “In light of the developments that we have seen and the impacts on financial markets, we want to take a little bit more time to evaluate the likely impacts on the United States.”

Overall, the group’s tenor has turned a little more tentative. At the Fed’s last meeting in June, 15 of 17 policy makers indicated they still expect rates to move higher this year. That figure fell to 13 of 17 in September. The Fed also made downward revisions to its expectations for the economy’s long-term growth rate as well as its long-term projections for interest rates. The latter figure fell from 3.75% to 3.5%.

The latest figures on inflation also may have played a role in the decision to maintain rates. In August, inflation (as measured by the year-over-year change in the Consumer Price Index – see chart) remained low, with a 0.2% reading. This figure is well below the Fed’s target of 2.0%. While the unemployment rate has fallen to 5.1% (well below the Fed’s original target of 6.5%), there are few signs of wage inflation. The Fed believes the fall in the jobless rate indicates the slack in the economy is wearing away. Expectations are that wages will eventually start to increase, which should help inflation rise toward the Fed’s target level. (Note: Higher wages should lead to increased demand. Increased demand should serve as a catalyst to move prices higher.) 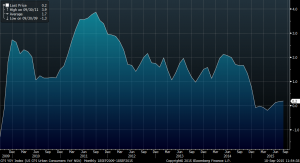 At a recent meeting with a group of clients, we were asked how interest rates impact the stock market. First, higher interest rates increase corporate borrowing costs. This hurts profit margins and weakens cash flow generation. In addition, as rates rise, it becomes more expensive for companies to finance future growth. By keeping rates low, the Fed is trying to spur growth.

Higher interest rates also negatively impact what a company is worth. At the simplest level, the ratio of a company’s current stock price to its current earnings per share is a measure of valuation (the price-to-earnings or P/E ratio). If earnings are lower, then the company’s price should also fall. If we value companies based on the present value of the cash flows they will generate in the future, higher interest rates will make future dollars worth less. This reduces a company’s valuation as well.

In addition, as interest rates rise, it becomes more attractive to hold fixed-income securities such as government or corporate bonds. In the current environment, many investors have avoided or reduced their allocations to bonds because they are simply not generating enough income. As rates rise, owning bonds becomes more desirable. This has a corresponding impact on equities, as investors should demand a greater return from their stock investments. Equities are considered to be riskier assets than bonds, so the return should be greater. If investors are assuming more risk, they should expect to pay less for the corresponding asset.

We will continue to pay attention to the Fed’s actions. However, once the Fed does start raising rates, we expect it will do so at a moderate pace. This should provide a positive backdrop for long-term investors. While we do not profess to know what the market will do in the short term, our long-term view, which is that the market will move higher, remains intact. Against this backdrop, we will remain diligent to our investment process and approach.