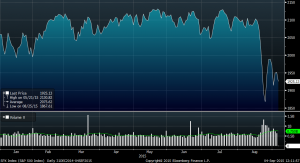 At this point, we continue to view the market’s weakness as a long-anticipated correction rather than the start of a bear market. While the stock market and the economy do not always move in sync, we are encouraged by the positive economic data in the U.S. and do not think a global recession is imminent. At the same time, we rarely try to make market-related forecasts because it is simply too hard to do so with much success.

However, we do believe it is reasonable to expect the market to continue to be more volatile, at least in the near term. Through August 19, there was only one day this year in which the S&P 500 closed more than 2% above or below the previous day’s close. In the two weeks since, there have been six such days. The Chicago Board Options Volatility Index (VIX) reflects a market estimate of future volatility. On August 24, it closed above 40 for the first time since October 2011. Until the VIX closes below 20, the market is likely to stay more volatile. 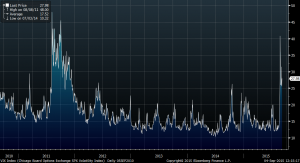 While U.S. economic data remains solid, the market is going through a correction. Most of the factors weighing on the market are truly secondary to the economy. Many U.S. investors appear spooked by the problems in China; however, it seems that it should not have a meaningful direct impact on the U.S. According to a recent article by James Surowiecki in the New Yorker, total U.S. exports to China are only $165 billion, or less than 1% of U.S. gross domestic product. Goldman Sachs also estimates that just 2% of the S&P 500’s revenue comes from sales to China. While there are firms trying to take advantage of the market opportunity in China, for the majority, generating significant sales to Chinese consumers remains more of a hope than a reality.

Against this backdrop, we remain focused on the long term (and do not intend to become either a day trader or a market bystander). Our long-term perspective makes it easier for us to look at the declines of some well-managed companies that are not currently held in client portfolios as an opportunity. We do not intend to time the market, and wait for the bottom to be reached. Identifying the bottom is mostly due to luck. Timing the market has proved to be a flawed strategy over the years. We will remain true to our investment philosophy and process and the expectations of our clients. Over the long haul, we expect the market will move higher. This belief will drive our actions moving forward. Market corrections offer wonderful opportunities to create lasting wealth. We will continue to apply our process while looking for such opportunities.