Should Investors Run for the Hills?… No

Last week’s market performance was tough on investors. On Friday, the S&P 500 stock index fell 3.2% completing the market’s worst week since 2011. That put the market roughly 7.5% below its recent peak on May 21. It was also 3.0% lower on a total return basis (i.e., including dividends year-to-date) and 4.3% on a price-only basis. The picture looks even worse if you factor in Monday morning’s open, which based on prices as this commentary was being written, pushed the S&P 7.8% below where it started the year. U.S. investors are not alone in seeing portfolios lose value. Many global markets have performed even worse, with stocks down across Asia and Europe. The price of oil and emerging market currencies worldwide continue a decline that commenced last year.

It is never pleasant to see your portfolio’s value decline. At the same time, it is unrealistic to expect that portfolios will rise year after year. If we follow the general rule of thumb (a market correction is defined by a decline of 10% or more), it has been nearly four years (October 2011) since the last market correction – an unusually long time. In short, while we know that we cannot forecast the timing of a correction, it is not altogether surprising that one is likely underway. Based on trading levels early Monday morning, the S&P 500 is down 10.9% year-to-date. If this level holds, the S&P will end the day officially in correction territory. 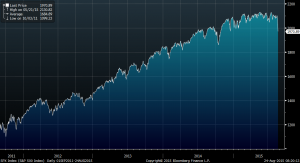 Market commentators have provided a number of possible explanations for the sell-off, including an oil price decline that has been driven by a supply glut (which negatively impacts the profits of both energy companies and oil-dependent emerging markets), a slowdown in the Chinese economy and a credit squeeze in emerging markets. In addition, while the pace of growth in the current U.S. expansion has been less than that of previous economic booms, the U.S.’s economy is certainly in better shape than just about any other country around the globe.

The market’s leadership this year has been rather narrow and the number of underperforming stocks continues to increase. As of Friday’s close more than 30% of the stocks in the S&P 500 were down 20% or more (a 20% decline is generally indicative of a bear market) and almost 70% of the index’s members were down at least 10%. Based on prices early Monday morning, more than 40% of the index’s members are down at least 20% while more than 80% of its constituents are at least 10% lower.

In short, at a minimum, a simple 10% correction is long overdue. Based on data from Dow Jones, Morningstar and Bloomberg, since the end of World War II (1945), there have been 27 corrections of 10% or more, versus only 12 full-blown bear markets (with losses of 20% +). This equates to one correction roughly every 20 months, according to Dow Jones index maven John Prestbo, who points out that this average does not mean they are evenly spaced out.

While not all the economic data has been strong, the usual indicators of recession, at least in the U.S., are not present. This is important to note, as historically bear markets happen when the economy goes into recession.

In the meantime, the best response for investors is to take a deep breath, appreciate the strong returns the market has provided over the last five years and remember that this is not the time to panic. At this time, we do not know whether the fundamentals driving the market’s sell off discussed above will get worse or better. It is not known whether the pullback will extend far enough for it to be considered a bear market. This is difficult to predict; however, we do believe economic activity in the U.S. and in developed markets outside the U.S. will continue to show growth, albeit slow.

For much of the past five years, investors have become spoiled by the market’s relatively low volatility. Volatility has been remarkably low, particularly this year. For 138 straight trading days, the S&P 500 closed between 2,040.24 and 2,130.82. This streak, which represented one of the longest and tightest trading ranges in decades, ended on Thursday. We think volatility is likely to increase, at least in the near term. Clients should be comforted to know that our valuation-based approach has helped us avoid the vast majority of the market’s worst performers. The market climate is still mostly favorable for stocks, although there are some areas to avoid. Over the long term, we maintain our view that the market will move higher. We view the market’s current sharp downdraft as an event that can create opportunity. We will look for opportunities to deploy client cash into securities that can add long-term value.

At BWFA, we are paying close attention to market events. However, we will not become fixated on market news. Doing so will make it harder to stay focused on helping clients achieve their long-term investing goals. We are comforted in knowing that client portfolios are well diversified, as they hold much more than stocks, and have allocations to markets outside the U.S. as well. We are also not going to worry too much about whether the market is “officially” in correction territory. The outlook for the future is much more important than what is happening today. We are long-term investors and remain committed to that approach.