Can a Single Tweet Stop an Industry in Its Tracks?

On September 21, Hillary Clinton harshly criticized Turing Pharmaceuticals about an outrageous 5,000% price hike to a drug used by HIV patients. The story’s negative backlash caused the drug maker to back down from the price increase. However, the episode continues to hang like a black cloud over the shares of many healthcare companies, particularly biotechs.

It seems Ms. Clinton’s tweet raised considerable angst among investors who worry that Washington might take action that would negatively impact drug prices. Biotech stocks of all sizes tumbled following the tweet. While they have moved off the lows they reached on September 29, biotechs (as measured by the Nasdaq Biotech Index or NBI) are down 21% from their July 20 high. They are now only about 4% higher year-to-date (at their peak they were up 31% for the year). As depicted in the chart below, the NBI has sharply outperformed the S&P 500 since the market’s last correction back in 2011’s third quarter. 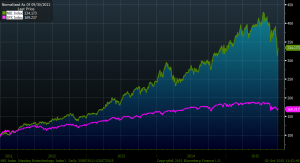 It is easy to argue that U.S. drug prices are too high and should come down. After all, in the U.S. people pay considerably more for drugs than those in other Organization for Economic Co-operation and Development OECD countries. The same applies to U.S. healthcare costs in general. At the same time, the precipitous price decline in biotech stocks seems like an overreaction. At this point, Ms. Clinton is not even the Democratic nominee for president, let alone in the White House. Even if she becomes president, any proposal she might make to lower drug prices would have to get through Congress where Republicans will likely control at least one chamber.

In addition, it is hard to imagine some of Ms. Clinton’s industry-related proposals being implemented. For example, she would like to pressure prescription-drug companies to spend a sufficient (undefined) percentage of their revenue on research and development (R&D) as well as dissuade them from spending large sums on consumer advertising by barring these advertisements from qualifying as tax-deductible business expenses. While it seems inappropriate to completely deny these companies the ability to market their products, it seems likely that many parents would not be upset if there were fewer Viagra or Cialis commercials during sporting events watched by young and old alike.

Most large pharmaceutical companies currently spend between 15% and 20% of their revenues on R&D. However, there are companies such as Valeant Pharmaceuticals Internationals Inc. (VRX) that spend atypically low amounts on R&D – VRX’s allocation to R&D is only about 3% of revenues. Innovation in the form of R&D is the industry’s lifeblood. According to estimates, the cost of discovering and developing a new drug ranges from as low as about $200 million to as high as $2.6 billion. Companies that put the capital at risk to develop new drugs need to be able to earn a return on their investments. If there is no incentive to discover and develop new drugs then innovation will likely fall pretty dramatically.

This is not the first time Democratic lawmakers have complained about high drug prices; it probably will not be the last. Investors that bought drug makers on previous worries; e.g., healthcare reform during Bill Clinton’s and Barack Obama’s tenures made out pretty well. They also survived jabs from Fed Chairwoman Janet Yellen in the summer of 2014 that biotech valuations were substantially stretched.

Sure, it could be different this time. However, even if lawmakers are able to close the loopholes and limit drug prices, they are unlikely to curtail them enough to hamper innovation. Companies that are developing novel products for unmet medical needs or targeting rare diseases are unlikely to be hurt much over the long term. Drug companies may have to learn to price with greater restraint, but we believe that well-managed, high-quality biotechs that are focused on innovation and developing new drugs for unmet medical needs remain attractive sources of investment.