Should Investors Care If the Federal Reserve Raises Interest Rates?

Many who work for either financial media outlets or on Wall Street continue to obsess about this issue. It has been quite some time since we last discussed the Fed or its potential actions at length. The subject can become tiresome. It also is not all that important to investors, at least not in the near term. However, we think we should at least touch on the topic this week.

About a month ago, it seemed likely that the Fed would raise rates at this week’s meeting. However, the environment has changed. First, China devalued the Yuan. In response, Asian markets, particularly China’s, tumbled. The US market also entered correction territory (i.e., down at least 10%) for the first time since 2011. According to Bloomberg data, before China’s devaluation, futures traders believed there was about a 54% chance the Fed would start raising rates in September. Now that figure has fallen to about 28%.

Historically, when the Fed starts raising rates, the stock market reacts favorably. This is because the Fed normally starts raising rates when the economy is strong and corporate earnings are growing. However, largely due to the sharp decline in oil prices over the last 15 months, corporate earnings have declined. (In the chart from Yardeni Research that follows, note that both the blue (reported earnings) and green (operating earnings) lines, which show rolling four-quarter earnings over time, turn lower at the far right.) 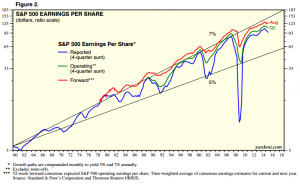 While job market data continues to be positive with unemployment down to 5.1%, core inflation remains firmly below the Fed’s 2% target. Inflation expectations also appear to be under control. Second-quarter gross domestic product growth was around 4%. This figure is somewhat high compared to most of the recent recovery cycle. However in historical terms, it is certainly not indicative of an overheated economy. None of these factors indicate an urgent need for the Fed to tighten.

Even a slight change in rates would make the US look very different from both developed and emerging markets. We are living in a world full of easy monetary policy — meaning low interest rates and, in the case of the European Central Bank and Bank of Japan, outright asset purchases — and even a slight change from the Federal Reserve puts the U.S. on an island.

On the other hand, it has been nine years since the Fed last increased interest rates. Starting to move rates higher could prove important in the future. While there are no signs that a U.S. recession is imminent, recessions are a normal part of the economic cycle. Moving rates higher would create more room for maneuverability in the future. An argument can also be made that the recovery has been going on long enough and it is simply time for the Fed to raise rates.

In the end, one rate hike should not be a market killer. Even a few rate hikes, provided they are done at a measured pace, should not negatively impact the market. Historically, rates are considered normalized around 3%. We think it will take a considerable amount of time before rates get that high.