Last week China decided to devalue its currency in an effort to boost its economy. We do not often write about the latest economic or market news because we find it too hard to predict with any degree of certainty what might happen next. However, China’s decision was a topic of discussion at our weekly Investment Committee meeting. In addition, there has been considerable discussion among both the “talking heads” on financial television and in published media on the issue, so we thought it would be a worthwhile topic this week.

The move was likely the latest effort by the Chinese government to revive economic growth. Last Monday, China reported that in July exports fell 8.3% year-over-year and 4.9% versus June. Devaluing a country’s currency is one of the simplest means of making exports more competitive and imports more expensive. The result is that both external and internal demand can be diverted to domestic production. This, in turn, hurts foreign suppliers. It also can be viewed as an effort by one country to essentially “take” from another. This is because there is only so much money to be spent on goods and services. Lower prices should result in increased demand for a country’s own goods and greater demand for its exports. As a result, there will also be less in available funds to purchase comparable goods and services from another country.

The Chinese government’s decision resulted in the biggest drop since the currency was officially devalued in 1994 (note in the following graph more Yuan per dollar indicates a weaker Yuan). The Yuan is also pegged to the dollar; so for much of the past few years, the Yuan had been strengthening. In fact, the Yuan and the dollar were essentially the only major currencies to strengthen during that period. 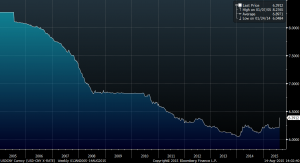 One could even argue that the China decided to devalue its currency because it expects that the U.S. will raise rates. If the U.S. raises rates, the U.S. dollar should strengthen. Since China’s currency is pegged to the U.S. dollar, a stronger U.S. dollar would impact the yuan as well. By devaluing the yuan, the Chinese could be looking to proactively reduce the impact of a potential U.S. rate hike on its currency.

By reversing course, China’s decision leaves the U.S. as the only major country willing to allow its currency to strengthen. Excessive dollar strength could have an impact on the Federal Reserve’s decision about when (or if) it should start raising interest rates. In fact, following this announcement, traders lowered their expectations that the Fed would raise rates in September. When the Fed does start raising rates, it will be the first time it has done so in a considerable period. China’s decision to devalue its currency will not necessarily stop the U.S. from raising rates. It could, however, cause delay its decision to do so.

In the meantime, the turmoil caused by concerns about rate hikes, currency devaluations and other factors can wreak havoc on the market over the near term. It has also been more than five years since the market’s last correction. Eventually, the market will retreat, as not all roads point to the sky. While the S&P 500 Index is up less than 5% year-to-date (including dividends), many stocks are at least 20% below their 52-week highs. As a general rule, we believe we are more likely to find opportunities by reviewing the new low list than by piling in on a stock that has been delivering strong returns. We continue to cull through the list of underperforming stocks for potential investment opportunities.