Lower prices have caused oil companies to sharply cut spending – OPEC estimates global oil investments will be slashed by $130 billion this year – and the U.S. Energy Information Administration (EIA) expects production will be relatively flat in 2016. Increased efficiency and greater effort on the part of oil companies to drill wells in those parts of their oil fields that yield the greatest amount of crude oil will allow oil producers to increase production this year, even though spending is falling. It is important to note that oil production declines over time, as oil is a depleting resource. As time passes, the amount of oil produced from a given location drops. Lower spending today should ultimately cause supply to decline. Less supply should result in higher prices.

In the price chart that follows, readers should note that Brent trades at a premium to WTI. This reversal from the historical trend (i.e., WTI used to trade at a premium to Brent) began in late 2010. This change is attributable to meaningful U.S. production growth as well as U.S. law, which generally prohibits U.S. producers from exporting crude outside the U.S. On the other hand, finished product such as gasoline and jet fuel can be exported. This has benefited the operations of those companies that refine oil. 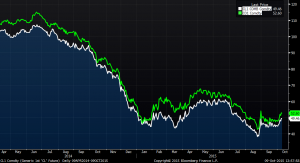 On Friday, the House voted to lift the 40-year-old ban on oil exports. This ban was first instituted after the 1970s oil embargo that sent domestic gasoline prices skyrocketing. Many oil companies have been pressing the issue with Congress for more than a year. It is too soon to know whether this vote will lead to a law change, as President Obama has opposed oil exports. Passage may also be more contentious in the Senate.

Over the long term, allowing exports could have a positive impact. It would make oil markets more global. Plus gasoline prices are based on the price of Brent. The spread between Brent and WTI would theoretically narrow if WTI could be exported. This could cause gasoline prices to fall. In fact, in September, the EIA found that exporting oil could help lower gasoline prices.

The industry dynamics described above are important factors in BWFA’s decision to continue to hold investments in oil and gas companies even as prices have fallen. Our focus is on what we perceive to be well-managed companies with strong balance sheets and efficiently run operations. These companies also pay generous dividends, which we believe to be safe as long as market fundamentals do not deteriorate markedly. These dividends, in essence, allow investors to be paid to wait. This means their investments provide current income during a period when industry conditions are less than ideal. While such a posture can hamper short-term results, we believe it will serve investors well over the long term.