Here at Baltimore-Washington Financial Advisors our coordinated team approach to serving our clients, parallels the disciplined, synchronized efforts required in the sport of rowing, which happens to be my passion.

The sport of rowing has been in existence since the 15th century BCE in Egypt. The modern Olympic sport we know today has its roots in the United Kingdom. It blossomed in the United States in the middle 18th century with the advent of the Harvard-Yale race, the first intercollegiate sporting contest in our country.

I have competed in rowing since my college days, and I still compete today through USRowing Masters regattas. This is the ultimate team sport, where every rower must match exactly the movements of the others in the boat to achieve a successful outcome. But do not take my word for it—George Pocock, a pioneering boat builder in the 20th century who was featured in the recent New York Times number-one best-selling book The Boys in the Boat says it more poetically: “Where is the spiritual value of rowing? …The losing of self entirely to the cooperative effort of the crew as a whole.

Others who have experienced the physical demands of this sport as collegians include pediatrician and author Benjamin Spock and actors Gregory Peck and Hugh Laurie, to name a few. They as well as I have shared with our fellow rowers the experience of harmony, balance, and rhythm that comes from racing in a boat that ranges to as much as 60 feet long and is no more than two feet wide. Those three attributes of harmony, balance, and rhythm give rowers the ability to handle many of
life’s challenges and, dare I say, help keep the world in better balance.

I once heard someone describe a rower as having the strength of a power lifter with the grace of a ballerina—which accurately describes the elite rowers of the world, and those of us striving to remotely resemble those top Olympic athletes. Olympic rowers race over a 2,000-meter course, and physiologists claim that racers expend the same amount of energy as basketball players in two back-to-back NBA games—only doing so in a mere six minutes!

At BWFA, our team approach to helping clients requires the same levels of precision, coordination, and synchronization found in the sport of rowing. Often, several BWFA associates are working in concert to achieve successful outcomes for our clients. Our tax advisors, financial planning professionals, business services manager, and investment management advisors, along with our support staff, join forces with one goal in mind—to achieve a winning result for our clients!

I had the privilege of competing this summer in England on the historic Henley course on the Thames River. In addition, I recently earned several medals, including two gold, at the USRowing Masters National Championships, which took place on the Cooper River in New Jersey. Take it from me: those long, sleek boats skimming across the river appear so peaceful and calm, but there is tremendous effort and extensive training that contributes to creating that outcome—much like what we aim to accomplish for our clients here at BWFA. 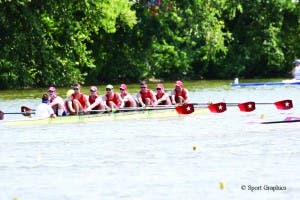 Joe is in the last seat of this gold-medal-winning boat at the USRowing Masters National Champtioships, Camden, NJ, August 2015. He is pulling with his teammates from Potomac Boat Club. © 2015 Sport Graphics