A review of the S&P 500 Index’s returns by sector over the last one, three, six, and 12 months, as well as year-to-date, shows that energy has easily been the worst performer over all periods. In fact, while the energy sector’s twelve-month decline is only about 3.3%, it is notably the only sector to fall over the last 12 months. Overall, the S&P energy sector is down more than 20% since reaching its all-time high on June 23rd.

This decline is being driven by lower oil prices. Last Thursday, prices for the West Texas Intermediate crude oil (WTI), is the primary type of oil produced in the US, briefly fell below $80 in intraday trading for the first time since June 2012. On a closing price basis, WTI is currently trading about 24% below the 52-week high price it reached in June. Since they have both fallen more than 20% from their highs, oil prices and energy stocks have reached bear market territory. Some analysts predict oil prices could fall even further; perhaps as low as $70 per barrel.

Two factors are pushing oil prices down. The first is supply; and the second is slower demand growth. In the U.S., hydraulic fracturing has helped drive production to its highest level in decades. Since 2004, U.S. oil production has surged 56%. Despite the turmoil in the Middle East, production has resumed in Libya and increased in Iraq. At the same time, world-wide demand is becoming more stagnant. Last Tuesday, the International Energy Agency (IEA) cut its full-year oil demand growth forecast. As a result, this year’s projected increase of 700,000 bpd is the smallest in five years. Expectations of decelerated demand growth and higher-than-expected supply have likely accelerated the price decline. Worries about the strength of the global economy also weigh on oil prices. 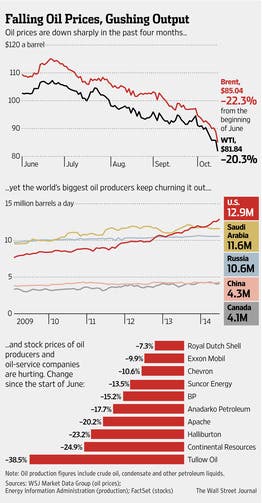 On the positive side, consumers benefit from lower oil prices. According to gasbuddy.com, a gas price-finding app, the retail price of gasoline for the average American had dropped from about $3.70 in late June to an average of nearly of $3.17 per gallon as of Tuesday. This equates to about a 15% drop, as gasoline prices typically fall more slowly than oil prices. According to Deutsche Bank’s Joe LaVorgna, every one cent change in the price of a gallon of gas is worth approximately $1 billion in annual US household energy expenditures. By LaVorgna’s estimate, consumer cash flow will be expanded by an approximate annualized rate of $50 billion. Higher consumer cash flow can also positively impact U.S. economic growth.

At BWFA, our value-based approach of investing often leads us to take more of a contrarian view of falling prices. We think the decline in energy stocks can present opportunity. Oil supply has grown. At the same time, the cost of producing oil has increased. In our view, this makes it more likely that oil prices will move higher over the long term. In addition, many high-quality energy companies pay above-average dividends, allowing shareholders to, in essence, be paid while they wait for share prices to appreciate.