Last week was not a good one for most investors. The S&P 500 closed higher only one day during the week, Tuesday, when the index rose about three points (about 0.15%). 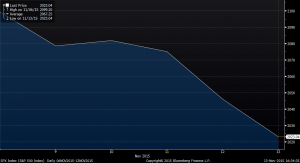 This short-term performance should have little impact on how your assets are managed. Unfortunately, many investors base their investment decisions on short-term market movements, which cause them to deviate from their long-term investment plan. Behavioral economists refer to this tendency of focusing on short-term events rather than the long-term plan as myopic loss aversion. Unfortunately, it can really hamper returns.

The main driver of myopic loss aversion is frequent feedback. One way to reduce its impact is to look at how your investments are performing less frequently. It can be a source of amusement when stories are told about investors who simply put their unopened statements in a drawer when the market is not performing well. Some of us could never imagine doing that. But, the idea could have some merit.

For example, according to the Wall Street Journal, if you check the S&P 500 index every day, you will find that, historically, it has moved lower about 47% of the time. If you only check once a month, the results get a little better, as the market only goes down about 41% of the time. If you want to increase your chances of seeing the market move higher, check only once a year, you will find the market rises about seven out of every 10 years. If you look once a decade, you will only be disappointed about 15% of the time. This last sentiment aligns well with a quote from Warren Buffett who said, “Only buy something that you’d be perfectly happy to hold if the market shut down for 10 years.”

Interestingly, valuation metrics are much more meaningful over longer periods as well. In a recent post, Larry Swedroe discussed the findings from a research paper that evaluated tactical strategies based on price-earnings ratios.

In our weekly posts, we often discus our long-term market view – we expect the market to move higher rather than lower. We also try to remain calm when the market falls, even when it falls as sharply as it did on August 24.

The following chart shows the market’s performance over the last 20 years: 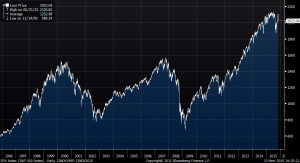 While it is certainly not easy to hold through major bear markets like those seen in the early 2000s and 2008-2009, and there may be times that it is better to sit on the sidelines, investors who held onto their stocks through both periods would have reported long-term gains. If you want to refrain from looking at how the market is doing on your cellphone or to stop watching too much of the financial news on television, you can take solace in the market’s long-term performance. Much of what happens in the short term is simply noise.

As always, we remain diligent in the consistent application of our investment process and approach.