Typically when the economy expands, there is a sharp upswing in corporate investment in new machines, factories and technologies. With the current expansion proceeding at a more measured pace, capital spending has not boomed. Economists and policy makers around the world use lackluster long-term investment as an explanation for the meager gains that have been seen in productivity as well as the slow pace of economic growth.

Many economists are not overly concerned by this trend. One can argue that the data indicating weak corporate investment is simply not reflective of meaningful new trends in technology and business practices. Similarly, there is a belief that the nature of production has changed: Improvements in technology and connectivity are making machines more efficient. At the same time, advances in software and data processing are reducing the need for traditional capital-goods equipment.

A few factors may be driving this trend. First, businesses have increased expenditures on intangible assets, such as research, skills and patents. According to economists, such spending is not fully reflected in all the official statistics. Recently, the Federal Reserve issued a paper noting another factor, particularly in IT equipment and software: price trends have increasingly failed to capture quality gains in high-tech equipment.

At the same time, businesses are progressively outsourcing key functions. Spending on cloud computing, which allows company data to be processed on a server at another location, is surging. The trend toward moving everything to the cloud is also reducing the amount traditional businesses spend on desktop computers and other information technology equipment.

Some companies are going even further by tapping into nonbusiness assets originally purchased by their employees for personal consumption. For example, instead of employers footing the bill for company phones, employees are using private cellphones or tablets for business needs. In addition, the number of employees that telecommute has also increased. Most telecommuters use personal computers and other equipment when working remotely, rather than relying on company-owned devices.

While there are efforts across the globe to include research and development spending in data reported to the government, such data still does not capture the many investments in intangibles that are crucial to company performance (e.g., R&D, software, patents and advertising). As a result, firm innovations, which to a large extent are driven by their intangible investments, may be reflected in everything but their productivity statistics. For example, according to Germany’s statistical office, Destatis, when Germany added R&D to its investment statistics for the first time last year, its gross-domestic-product levels showed a noticeable increase.

The shift in spending from tangible to intangible assets is highlighted in the following chart.  Ocean Tomo, LLC (an Intellectual Capital Merchant Banc™ firm providing Opinion, Management and Advisory services centered on intellectual property assets) estimates that over the last 40 years, for companies in the S&P 500 index, the allocation of a firm’s market value to tangible assets (e.g., property, plant and equipment) and intangible assets (e.g., trademarks, trade names, patents, know-how) has essentially flipped. In 1975, companies were primarily valued based on their tangible assets. Today, most of their value can be attributed to their intangible assets. Coca-Cola serves as a good example of a company valued primarily on the basis of its intangible assets. To a certain extent, Coke is not much more than carbonated, flavored water. The company’s value is largely due to the value of that flavoring and the value of having the name “Coke” on its packaging. 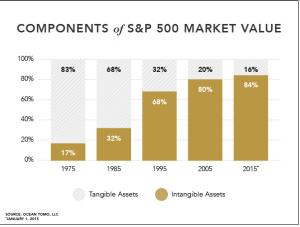 From an investment perspective, it is much harder to estimate the value of companies if their assets are primarily in the form of intangibles. Warren Buffett often refers to economic moats when discussing a company’s investment merits. (An economic moat refers to a business’ ability to maintain competitive advantages over its competitors in order to protect its long-term profits and market share from competing firms.) At BWFA, the factors we used to assess a company’s economic moat include its gross and operating margins (especially relative to its direct competitors) as well as the strength of its balance sheet and how successful it is at generating cash flow.