At the risk of dulling your senses with yet another discussion of the Fed and interest rates, we thought it would be worthwhile to share a few thoughts about interest rates and the markets. Admittedly, we know that having great confidence in any type of market forecast is a fool’s errand. We even question whether or not investors should care that much about the Fed and its actions. However, like everyone else that invests in stocks or follows the markets for a living, we know we have to pay attention to the news and occasionally write about it in our weekly commentary.

Expectations are high (about 74% according to recent Bloomberg data), that the Fed will raise short-term interest rates slightly at its December 15-16 meeting. To many observers (including us), the increase has been a long time coming, as the U.S. has just gone through seven years of virtually zero percent short-term interest rates. The U.S. job market continues to exhibit signs of strength, and wages finally appear to be showing some indications of growth. While U.S. gross domestic product growth is not robust, it is stronger than what is found in other developed nations. All of these factors support the case for higher rates.

What is harder to discern is what effect an interest rate increase might have. There are many different potential outcomes; for example:

There are similar examples where higher rates could have positive or negative implications for the stock market. Hopefully, the above format is enough to give everyone a good idea of why it can be so hard to predict a given event’s potential market impact.

There is also not much historical precedent. The last time rates increased after remaining low for such a long period was in 1941. Not only was that a long time ago, but circumstances and society were much different as well. So, the past provides little value in guessing what might happen this time.

In the meantime, the stock market has meandered for much of the year. The S&P 500 Index (S&P) is down about 1% year-to-date. If we dig a little deeper, we see that as of midday on Friday, 177 stocks in the S&P are down at least 10% in 2015; 143 have gained at least 10% for the year. This means that only a little more than one-third of the stocks in the S&P have performed in a way that reflects how the “market” is doing. 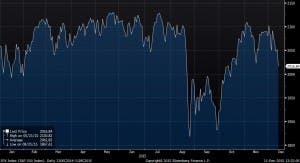 Overall index leadership is very narrow as well. According to this article, through last Tuesday, the 10 most valuable companies in the S&P by market cap were up by about 21.4% as a group for the year, versus a loss of about 2.6% for the rest of the market. The gap was last this wide in 1999.

Against this backdrop, we believe the best approach is to remain committed to the consistent application of our investment process. We continue to use it to help us identify financially strong, high-quality, well-managed companies that we believe will add long-term value to client portfolios.