If you remember the movie Back to the Future II you will recall that Biff goes to the future and steals a Sports Almanac. He then returns to the past and gives it to a younger version of himself. Young Biff used this book to become very wealthy by betting on sporting events where he already knew who had won. When watching this movie today an investor might well ask herself if it would not have been even easier and potentially more lucrative to know in advance which stocks were going to be the best performers over a specific period.

For this exercise, let us assume we can take the list that follows of the best and worst performing stocks in the S&P 500 Index from New Year’s Eve,1999  to the present and give it to our younger selves prior to the turn of the new century. Over that period, the S&P 500 rose by 30.30% (excluding dividends); the highest returning stocks delivered far greater gains. The best performer was Monster Beverage Corp, which has seen its price increase by a factor of nearly 500. Since its returns were so much better than every other stock on this list, it would make sense to purchase only the top-ranked stock. For purposes of this exercise, we should also assume that you were only allowed to purchase the stock once – meaning you could not sell it in anticipation of seeing the price fall and then buy it back at a lower price.

The unanswered question is “How many investors would have had the stomach to hold the stock for the entire period?” The fact is that owning Monster during this period could easily have made you sick to your stomach. Using our Bloomberg terminal, we looked at the stock’s daily returns over the entire period (4,036 days). We found that it closed higher 2,007 times (average gain 2.31%), it fell 1,865 times (average decline of 2.04%) and was unchanged 164 times. Clearly, it was a bumpy ride, to say the least.

However, here is the hardest part: As shown in the bottom (red) portion of the following chart, Monster’s shares fell nearly 70% in a 12-month period lasting from October 2007 to October 2008. This was not the only difficult period to hold this stock. From June 2012 to October 2012, the shares lost nearly 50%. A similar decline was seen from July 2006 to November 2006. None of these declines was gradual either. All happened in a relatively short time period. Sure, you would have seen your investment multiply by nearly 500 times if you held during the entire period. But, the sudden, swift declines would have led your younger self to at least question whether or not the information you received from your older self was believable. 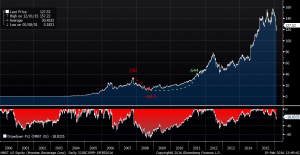 It might have been even harder if your younger self was aware of the research on share price performance conducted by JP Morgan Asset Management that we discussed in this space in December of 2014. Using a universe of Russell 3000 companies (the 3,000 largest U.S. companies by market capitalization) JP found that since 1980 roughly 40% of all stocks have suffered a permanent 70% or greater decline from their peak levels.

In many ways, it is hard to believe that the best performing stock over the last 15-plus years could have suffered such gut-wrenching declines. (Note that if we performed this exercise for the other stocks on the list, the results would have been somewhat similar.) It would have been hard to maintain confidence that the end result would turn out as predicted. The moral is that it investing is not easy. It never is. Even if you select the best stocks, there are going to be times you experience losses along the way.

It is important to remain true to your investment process. The type of declines discussed above can also present opportunities for investors. The stocks of even the best companies can suffer precipitous declines. This does not always mean it is time for existing holders to run for the exits. It also can be an opportune time for those that do not hold shares to initiate positions. In this environment, we continue to look for such opportunities.

[i] Gilead Sciences and Celgene Corp are currently on BWFA’s “Buy/Hold” list and may be held in client portfolios.