The Millennial Generation: Experiences Versus Things

Based on our observations, what consumers want to spend their money on is changing. A conversation with most of our children typically shows that they are much more interested in experiences than in things. For many, the primary item they want to own is an electronic device such as a smartphone or tablet. They are less interested in owning computers. They do not worry as much about the clothes they wear, which has minimized the number of new fashion trends over the last several years. Many of them do not want to spend considerable sums on a vehicle either. This has led to the creation of many small villages in suburban areas where townhome communities are built within walking distance of shopping centers that include grocery stores, several places to eat and movie theaters.

Many of our children are part of the millennial generation (generally those born from 1980-2000), which makes up America’s largest generation by population. Not only do millennials greatly value experiences, they are increasingly spending their time and money on them. Their pursuits range from concerts or social events to athletic pursuits, cultural experiences, and events of all kinds. Their happiness seems to be focused less on possessions or career status than was their parents’ and grandparents’.

To them, life is more about creating, sharing and capturing memories that come from the vast number of available opportunities to do and experience things. Their increased focus on experiencing life supports the growth of an economy driven by the consumption of experiences rather than goods. This trend takes on even greater importance if you realize that millennials are soon to enter their prime earning years. Boston Consulting Group estimates millennials currently command $1.3 trillion in annual consumer spending. This figure is only going to grow as this group ages.

The stock market is starting to reflect the priorities of the millennial generation. Leisure and travel-related stocks, including pubs, airlines and pizza restaurants have strongly outperformed those of traditional retailers since consumer confidence increased in the wake of the 2008-2009 financial crisis.  As shown in the graph that follows, for indexes tracking the relative performance of these industries, their outperformance recently reached its highest level since at least 2011. 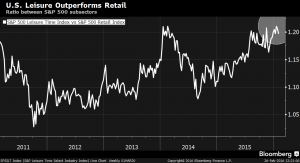 Eventbrite, a firm that enables people all over the world to plan, promote and sell out any event, found that:

During the market’s difficult start to the year, we have often discussed our desire to find companies that we believe have seen their share prices fall more than they should. Recently, we discussed our decision to eliminate our position in Plains All-American Pipeline, LLC. In our research to find businesses we thought had become attractively valued during the current market downturn we paid particular attention to those that we believe are well positioned to benefit from the trends described in this commentary. This has led us to add both The Priceline Group, Inc. and The Walt Disney Company to our list of Buy-rated securities[i]. We believe both represent the type of well-managed, financially strong companies we seek. We also felt that the valuation of both companies provided the opportunity to generate long-term gains in client portfolios. For those of you with children and grandchildren, remember that your kids enjoy experiences; take the time to enjoy some with them. They can create memories that last a lifetime.

[i] The Priceline Group, Inc. and The Walt Disney Company are currently on BWFA’s “Buy/Hold” list and may be held in client portfolios.