The Dangers of Hindsight Bias

After an event has occurred, we have a tendency to see the event as having been predictable, even if we had little or no objective means for predicting it. This concept is referred to as hindsight bias or the knew-it-all-along effect. 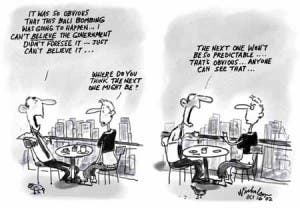 Hindsight bias also refers to our mind’s tendency to immediately adjust our view of the world to help explain or justify a surprising outcome. For example, say that two supposedly evenly matched teams are about to play a basketball game. The game ends and one team has clearly dominated the other. Our view of the world has changed, and we think the winning team is much stronger than the team that lost. In other words, the game’s outcome has altered our view of the past as well as the future.

This happens because of our mind’s inability to properly reconstruct past states of knowledge or beliefs. Once we have a new view of the world (or any part of it), we immediately lose much of our ability to recall what we believed before our mind changed.

In the book Thinking Fast and Slow, Daniel Kahneman discusses how hindsight bias was demonstrated for the first time by Baruch Fischhoff when the latter was one of Kahneman’s students in Jerusalem. Fischhoff and a classmate (Ruth Beyth) conducted a survey before President Richard Nixon visited China and Russia in 1972. The respondents were asked to assign probabilities to the potential outcomes of 15 of Nixon’s diplomatic initiatives. After Nixon’s return, the same people were asked to recall the probability that they had originally assigned to each of the 15 potential outcomes. The results were clear. If an event had actually taken place, people exaggerated the probability they originally assigned to it. If the event did not happen, the participants mistakenly recalled that they always considered it unlikely. Similar results have been found for other events that were in the public eye.

Hindsight bias can have meaningful effects on our evaluation of decision makers. It causes observers to assess the quality of a decision not by whether it was reached as the result of a sound process but instead by whether the outcome was good or bad. After the fact, it can be hard to recall the factors driving the original decision as well as the associated risks. This outcome bias makes it very difficult to evaluate a decision properly and to assess whether the beliefs that drove it were reasonable when the decision was made.

For investors, behavioral traits such as hindsight bias can hurt investment performance. One way to combat hindsight bias is to keep a diary. Such journals can serve as a reference for our future selves as we revisit earlier decisions. At a minimum, they provide us with a record of the elements that helped us make a successful (hopefully) or unsuccessful investment. They can also make us more self-aware of our thought processes.

At BWFA, when a new security is added to client portfolios, we write a research note that helps to provide a record of what we were thinking at the time the decision was made. The note includes the following elements:

When we review the company again in the future, it is important that we revisit the research note to assess whether or not the company is meeting our expectations. The investment thesis is particularly relevant. If it no longer applies, then it may be time to exit the position. This process also helps to reduce the possibility that hindsight bias will cause us to evaluate the success or failure of an investment solely by the outcome. It also helps us assess the quality our decision-making process.