The Federal Reserve’s decision to leave interest rates unchanged at last week’s meeting was not surprising. It is also becoming increasingly commonplace to see the Fed ratchet down its expectations for interest rates and economic growth. There appears to be a disconnect between what the Fed is saying about rates and what it has actually done. Based on what the Fed had to say, there is at least a chance that the Fed will not raise rates again this year.

If we go back three years and look at the Fed’s projections, we will see that they predicted rates would be a lot higher by 2016. Back then, no one thought U.S. interest rates would still be hovering just above zero. These are the Federal Reserve’s expectations for where interest rates are headed, by year, from a Washington Post op-ed by Larry Summers. 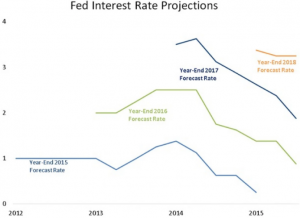 Rates are even lower in Europe. In Germany, the 10-year bond is negative. In Switzerland, the Swiss Central Bank kept rates unchanged last week at -0.75%. Japan’s interest rates are negative looking out 15 years; Germany’s are negative going out 10 years.

Earlier this year, Fed Chairwoman Janet Yellen and many of her cohorts expressed their view that rates would need to increase at some point. They did leave themselves some room to do nothing, saying that actual changes to interest rates would be “data dependent.” However, each time the Fed has had a chance to increase rates this year, it has held steady. Last December’s rate hike was the only one we have seen so far.

What has held the Fed back? One reason is the disappointing May jobs report. While unemployment remains down, wages have not risen materially and job creation has slowed. In addition, business investment remains muted and economic growth and inflation are modest at best. Second-quarter gross domestic product growth is likely to surpass that of the first quarter, but the economy certainly does not seem to be overheating. Inflation also remains tame – the most recent report showed that consumer prices rose by just 0.2% in May, falling short of forecasts. Uncertainty surrounding next week’s U.K. referendum over the nation’s membership in the European Union may also be weighing on the Fed’s actions.

As part of last week’s meeting, the Fed’s members also updated their economic projections. There are 17 members who provide forecasts. Of these, six see the Fed raising interest rates just once this year. Another nine members anticipate two rate hikes. It was not that long ago that the Fed was expecting to raise rates four times this year; another four increases were anticipated next year, too. Even the long-term interest-rate forecast was lowered. It is now down from 3.25% to 3.00%. When will the Fed increase rates? Even Yellen cannot specify a timetable. At a press conference following the Fed’s two-day policy meeting, she said, “We are quite uncertain about where rates are heading in the longer term.”

The Fed’s uncertainty surprised many because its economic forecasts did not change much from the quarterly projections released in March. Officials still expect modest economic growth near 2% annually over the next three years, a rise in consumer-price inflation to 2%, and an unemployment rate below 5%.

In other words, there are no expectations for a booming economy. However, the expected performance is better than that of other large developed markets, including Japan and the European Union, which are being weighed down by slower growth and lower inflation.

Against this backdrop, it can be argued that the market is asking – if not begging – investors to ignore bonds and look to blue-chip stocks for current income needs. At least for now, interest rates are expected to stay near 0%. This appears to be the new normal. While circumstances could change at any time, we have currently positioned client portfolios for this new normal.