For the week ended October 18, initial claims for unemployment benefits increased by 17,000 to a seasonally adjusted 283,000. The four-week average for initial claims, which smooths out week-to-week volatility, fell 3,000 to 281,000, its lowest level since May 2000. The sustained decline in the number of initial claims (depicted below) suggests that labor-market dynamics continue to improve. According to the Wall Street Journal, after adjusting for population growth, initial claims are hovering near historical lows. In general, positive news about the labor market, should translate into positive news for both the economy and the stock market. 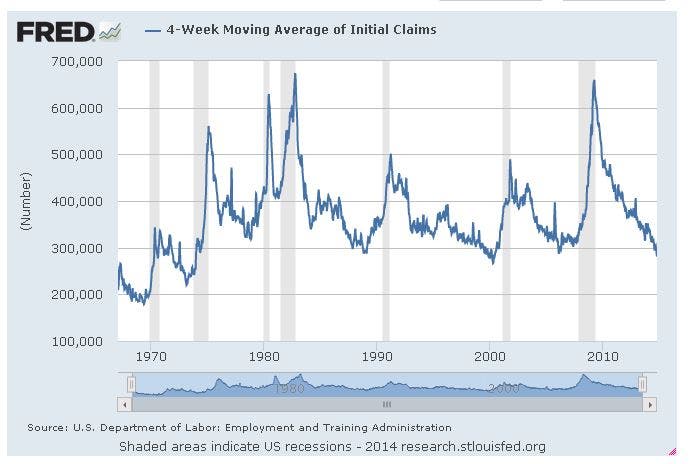 The overall unemployment rate has also pushed lower – it was most recently reported to be 5.9%. However, it is harder to assess the job market’s overall health because there is considerable uncertainty about how many of those who are employed are overqualified for their jobs or would like to work more hours. This has resulted in the Fed highlighting the “significant underutilization of labor resources” last month when it pledged to keep interest rates low for a “considerable period.”

In May, Accenture plc released a study indicating that some 46% (up from 41% a year earlier) of workers who graduated from college in 2012 or 2013 said they were in jobs that did not require their degrees. Such private surveys are needed because those compiled by the Labor Department do not ask for the necessary information. For example, if someone is working full time, they are not asked if they would prefer a different job or additional hours. In short, anyone who works full time is considered to be fully employed and content.

There are two sources for job market information that are widely followed by market participants. The first is the Labor Department. The second is Automatic Data Processing (ADP), a payroll processor covering 24 million employees – roughly 20% of all U.S. workers. When differences in the data exist, market followers typically favor the Labor Department’s data.

One area where the two data sources differ considerably is in their estimates of wage growth. The Labor Department estimates average hourly earnings grew 2% year over year in September. This compares unfavorably with the3.1% increase in the year ended December 2007, when the last recession started.

In contrast, Moody’s Analytics analyzed ADP data and determined that workers in that subset of the labor force earned 4.5% more in 2014’s third quarter than they did in the year earlier period. Not only is that figure larger than what the government calculated, it is also more than twice the rate of inflation – meaning those workers, at least, are getting ahead.

Among the key trends in the ADP data are that young workers are getting the largest raises and that raises at smaller companies – particularly those with 50 or fewer employees – have been larger than those at big firms.

In our view, labor markets are getting stronger. Wages may be growing even more than many believe. Regardless of pace of wage growth, steady progress in average hourly earnings and the number of hours worked has led to growth in aggregate income. This means that, collectively, workers are taking home more money, which should benefit consumer spending. The improvement in labor market conditions supports our opinion that the U.S. economy remains relatively healthy, which should be supportive for the markets.