A Look at Director Pay, Not the Fed’s Interest-Rate Hike

As expected, last Wednesday the Federal Reserve finally raised interest rates and moved away from its seven years of zero-interest-rate policy. If you came here expecting to find our thoughts on topics such as what the rate increase means or when the next rate hike might take place, we are sorry to disappoint you. We simply do not believe more lengthy discussion of this topic is necessary at this time. Indeed we feel, and hope you agree, that more than enough has already been said.

Instead, we would like to discuss a topic that we believe is much more relevant – corporate director pay.  In the past, we have shared some of our thoughts on executive compensation (here and here). However, there is another area where we believe compensation can be too generous – corporate directorships. According to Bloomberg, the highest-paid board members for companies that are part of the S&P 500 Index are the eight nonexecutive directors of Regeneron Pharmaceuticals. On average, they received nearly $1.9 million in stock and cash last year. The board only met seven times.

Bloomberg reported that Regeneron spokeswoman Hala Mirza defended its pay by saying that “Our board compensation reflects Regeneron’s unparalleled track record of success.” As the company’s historical price chart shows, long-term investors have certainly been rewarded. However, we still think a strong argument can be made that Regeneron’s director compensation is excessive. It seems likely that those that help the company “discover, invent, develop, manufacture, and commercialize important medicines for patients suffering from serious diseases” deserve a lot more credit than the company’s board. 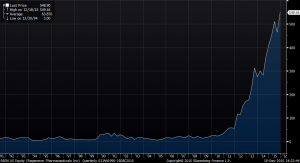 According to surveys conducted by the National Association of Corporate Directors, directors estimated that, on average, they spent 248 hours per year (or a little less than five hours per week) on each board they served on last year, up from 156 hours in 2003. Time spent includes attending committee and board meetings, along with the related travel and preparation. The Boston Globe also estimates that board members receive more per meeting, than the average Major League baseball player earns per game.

Growth in director pay has easily outstripped that of workers over the past 15 years as well:

Percentage change of median board of director salary, 2000-2014 by company size as compared to change in annual pay for U.S. workers

At the opposite end of the spectrum from Regeneron is Berkshire Hathaway. According to Bloomberg, the company’s directors earned average compensation of just $3,991 in 2014, the lowest of any company in the S&P 500. They were paid $900 for each meeting they attended in person and $300 for participating by phone. None of them received shares for their time.

There is no doubt that directors play an important role. They oversee management, hire and fire CEOs, ratify key decisions and help determine the company’s long-term strategy. At the same time, rapid growth in their pay can provide a disincentive when it comes to challenging executives. They could even be in a position where their high pay incents them to act in a way that allows them to keep earning their fee rather than act in the company’s best interest.

The unanswered question is, “Why is the pay of some directors so high?” As experts pointed out to Bloomberg, directors typically vote on their own pay and receive little pushback from shareholders.

At BWFA, we pay close attention to how companies allocate their capital. This means we are aware of how both management and the board are compensated. Compensating employees is one way that capital is allocated. Effective capital allocation is an important element of our stock selection process. We believe changes in corporate thinking are also needed, making compensation policies more equitable as they relate to management, directors, employees and shareholders.