There are a surprising number of parallels between investing and sports. Given that we are in the heart of football season, let’s take a look at some of the ways in which a football team and an investment portfolio are alike. (Readers should note that this commentary was inspired by the latest memo from Howard Marks, Chairman of Oaktree Capital[i].) 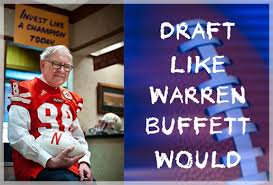 Every football team is a collection of players. Every stock portfolio is a collection of stocks. Every good football team has a strong general manager and supporting staff. In most cases, the general manager (with some input from the head coach) is responsible for making the final decision on the players who make the team. The general manager drafts new players for the team, signs free agents and, working with the coach and his staff, decides which current players should be re-signed and which ones should be released. They also decide which rookies and undrafted free agents should make the team and which ones need to move on.

Similarly, a strong investment portfolio is led by a portfolio manager (PM). A good PM institutes a well thought out investment process and consistently applies it. She also has resources that can help her achieve success. These resources can include people (analysts) or tools such as a Bloomberg terminal and/or any number of items that can be accessed online. Depending on the approach, she may rely on fundamental or technical analysis to drive her decision-making process. (At the most basic level, technical analysis evaluates a security’s potential by using charts; fundamental analysis starts with a review of the company’s financial statements.)

If you look at most football teams you will find strengths and weaknesses. Some teams have explosive offenses dependent on the success of a deep passing game. Others rely on a ground and pound running attack. Oftentimes, the best offenses are balanced. Depending on the opponent and the defensive play call, a balanced offense will use a mix of running and passing plays to move the ball down the field. It will also likely throw more short than long passes. However, if there is an open receiver downfield, the quarterback will take a shot when the receiver is open and the risk of a turnover appears low.

Like teams that rely on deep passing games, aggressive investors are more willing to take on risk. Their portfolios will likely be filled with fast-growing equities or stocks with positive momentum (e.g., securities that have delivered strong recent gains). Such stocks have the potential to grow a portfolio quickly. But, there is also more risk to this approach. A football team with a deep passing game is more likely to throw interceptions or see its quarterback get sacked. When aggressive investors are wrong, their ideas are more likely to generate losses.

A team with a balanced offense can be successful running or passing the ball. Teams that can run and pass successfully typically outperform those that can only run the ball or those that rely too much on long passes. Similarly, investors that take a more diversified approach by investing in multiple asset classes and market sectors often achieve greater success.

A balanced offense is also more akin to a value investing approach. It is more likely to go where it sees the openings the defense is presenting. Similarly, value investors typically take a bottom-up approach to investing. They look for value wherever it may exist in the market. This also makes them less likely to overpay for a security.

We do not mean to leave out defense, as we are familiar with the saying that good defense wins championships. However, that is a story for another day.

At BWFA, we believe our approach is more akin to that of a team with a balanced offense. We remain diligent in the application of our investment process, which we believe helps us identify attractively valued, financially sound, well-managed companies.

[i] Shares of Oaktree Capital are currently on BWFA’s “Buy/Hold” list and may be held in client portfolios.