The U.S. stock market’s recovery from its August 24th low has largely been driven by five of the 10 largest companies, as measured by market capitalization, listed on U.S. stock exchanges: Apple, Alphabet (Google), Microsoft, Facebook and Amazon.com[i]. As shown in the following chart, each of these companies has outperformed the S&P 500 as it has rallied over the past 10-plus weeks, reversing the impact of the market’s summer swoon. In fact, the S&P is now up nearly 2% for the year and is trading less than 2% below the all-time high it reached this past May. 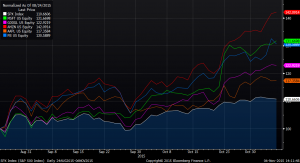 One of the biggest drivers of the outperformance by these tech companies has been the rise of the cloud and the internet economy, which is causing a steadily growing proportion of computing operations to shift to online services. This shift is helping these companies deliver earnings and revenue growth, something that has been challenging for many companies, particularly this year.

Importantly, these companies primarily sell services and derive their value from knowledge assets rather than hard goods. (In this context it is important to note that while most individuals think of Amazon as a place to buy goods, Amazon Web  Services, Amazon’s cloud computing business, has grown into a multibillion-dollar giant, increasing revenues at a 78% annual rate, according to the company’s most recent earnings results.) For those unfamiliar with the term, knowledge assets can be defined as follows:

The knowledge possessed by an organization and its workforce in the form of information, ideas, learning, understanding, memory, insights, cognitive and technical skills and capabilities. It usually exists in the form of databases, documents, guides, policies and procedures, software and patents.

From an investment perspective, since they are proprietary in nature, knowledge assets can provide companies with the type of sustainable competitive advantages that can lead to superior margins and profitability. In a recent blog post, Fred Wilson, a venture capitalist, argued that Software Is The New Oil. In Wilson’s view, the industrial revolution was driven by oil, which is essential in running factories and powering transportation. Those that controlled the oil benefited from the economic surplus created by the industrial revolution.

Currently, we are in a world driven by knowledge and information or an “information revolution.” Wilson’s view is that there is significant advantage to controlling the software of the information revolution. Companies with such control have the potential to profit greatly and the profits they derive can lead to “vast wealth and economic power.”

At BWFA, the allocation within most client portfolios that is more focused on providing capital appreciation or share price growth is largely allocated to companies that we believe are well positioned to benefit from the information revolution. These companies are typically less mature from a business perspective than those that would be more closely associated with the industrial revolution. However, we also hold an allocation to some more mature companies.  While these mature companies may have fewer opportunities to invest for current growth, they are more likely to pay steadily increasing dividends. Both types of companies have a place in client portfolios. The unifying thread is that regardless of a company’s current or expected growth rate, we continue to favor well-managed, financially strong companies that earn above-average margins relative to peers. Such companies should also be attractively valued and able to effectively allocate capital. These financial characteristics are also often indicative of sustainable competitive advantages.

[i] Shares of Apple, Alphabet and Microsoft are currently on BWFA’s “Buy/Hold” list and may be held in client portfolios.