The Changing World of Retail Banking

A meaningful shift in the retail banking industry is underway. It is being driven by millennials (individuals reaching young adulthood around the year 2000) and mobile-savvy consumers. These individuals are shunning retail branches. The amount of banking activity that is taking place via mobile devices and the internet is growing rapidly. This is causing banking institutions to provide the newest online and mobile features as quickly as possible.

According to a Nielsen survey, more adults (77%) – of all ages – prefer paying bills online instead of using any other channel. As depicted in the chart below, the relative preferences to conduct banking business through other-than-traditional means are even more popular among millennials. TD Bank reports that for this age group checking balances, paying bills and transferring money were among the top digital banking activities. More than half of millennials are already using digital channels to transfer money. 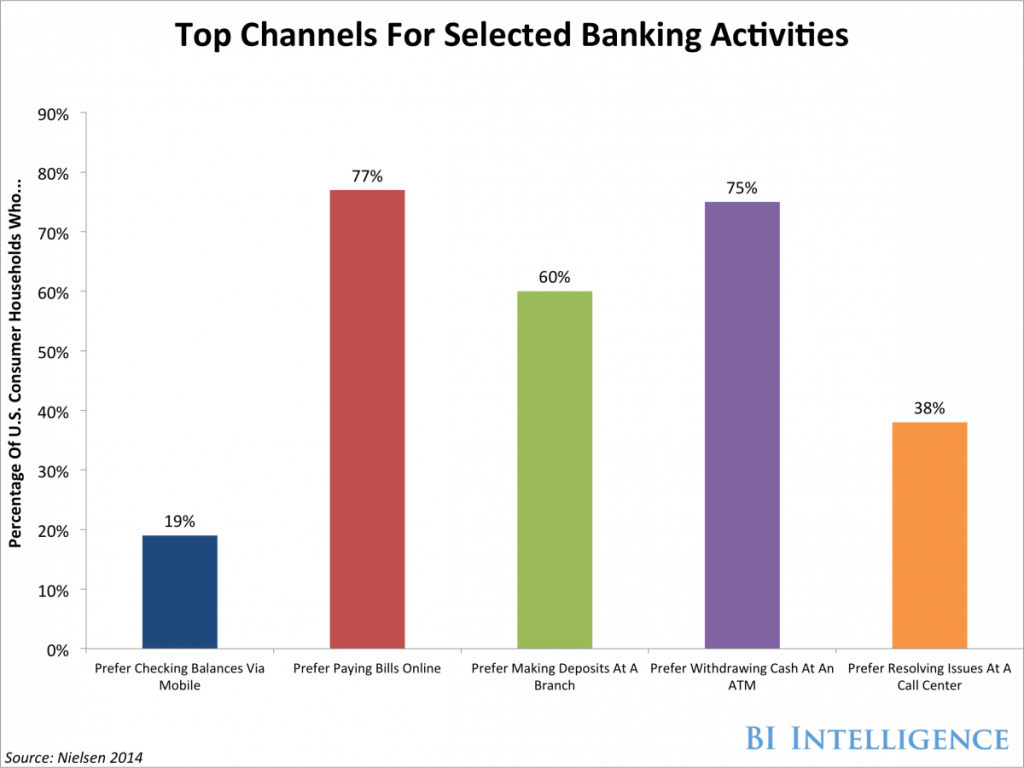 Traditional banks such as Wells Fargo[i] are being forced to change their product offerings in order to better match consumer tastes. For example, according to Wells Fargo’s business filings, at the end of 2014’s second quarter, it had in excess of 13.1 million mobile banking customers; a 285% increase relative to the 3.4 million mobile banking customers it had four years earlier.

According to data from Accenture, nearly three in four North American millennials have indicated their willingness to bank with non-traditional companies. These include companies like Square, PayPal[iii] and Apple.[iv]  The same study also shows that about two-thirds of such individuals are unhappy with their retail banking experience. About 40% of them would consider using a branchless digital bank.

Payment mechanisms are also changing. Services such as PayPal and Apple Pay are more secure than activities such as swiping your credit card at an in-store terminal, as they can limit the vendor’s ability to see the account number and other relevant information. This can help to eliminate the type of security breaches that have hit companies such as Target and Home Depot in the last year.

At BWFA, we believe these changes to the way individuals conduct their banking business and the increased use of online and mobile transactions represent long-term trends that are still in their early stages. It is certainly too soon to know who the ultimate winners will be. Our list of “Buy-“ and “Hold-“ rated securities includes a few companies we believe are well-positioned to take advantage of these long-term trends.

[i] Shares of Wells Fargo are held in the portfolios of some BWFA clients.

[ii] Shares of Google are held in the portfolios of some BWFA clients.

[iii] Shares of eBay (the owner of PayPal) are held in the portfolios of some BWFA clients.

[iv] Shares of Apple are held in the portfolios of some BWFA clients.