Earnings for big-box department stores continue to decline. Since peaking at a cyclical high on April 8, 2015, large department store stocks in the S&P 500 such as Nordstrom (JWN), Macy’s (M) and Kohl’s (KSS) have each fallen more than 50%. Their decline has accelerated recently. On the surface, this seems surprising, especially when one considers that according to the U.S. Census Bureau, retail sales rose faster in April than they had in a year. In fact, retail sales have risen year-over-year every month for the past five years.

However, the combination of increasing retail sales and struggling retailers has been going on for some time. According to Prodco’s weekly index, brick-and-mortar retail traffic has declined year-over-year in 209 of 260 weeks. This raises the question: What is the source of the increased retail sales? According to the data from the U.S. Census Bureau, consumers are going to the drugstore, the home improvement center and the bar down the street. Perhaps most importantly, they are also buying goods online. As shown in the following graph from Yardeni Research, this latter group, in particular, is taking market share away from brick-and-mortar stores. Not only are online sales growing, they appear to be doing so at an accelerating rate. Over the past year, Internet and catalog sales have grown more than three times faster than overall sales, rising 10.2%. On the other hand, over the same period, department-store sales declined 1.7%. 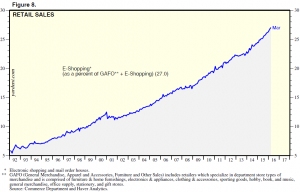 The company taking the most share from the department stores is likely Amazon, which, according to Morgan Stanley, is now our nation’s second-largest apparel seller. Historically, that category has been dominated by department stores.

Management for many of the large retailers has struggled to explain the sales weakness, which for some companies is the worst they have seen since the recession. Among the factors cited are weaker mall traffic as well as increased spending on items their stores do not sell such as entertainment, travel and food. J.C. Penney’s CEO attributed the slowdown to consumers “…simply spending their hard-earned dollars in experiences, entertainment and to beautify their home.”

Overall, the data is a positive for the U.S. economy, as consumers remain the economy’s primary driver, accounting for more than two-thirds of economic output. A spending slowdown in this year’s first quarter was partly responsible for economic growth nearly stalling, as gross domestic product (GDP) rose at just a 0.5% seasonally adjusted growth rate. The sharp increase in April retail sales could indicate faster GDP growth in the second quarter. When combined with the release of the minutes from April’s meeting of the Federal Reserve, stronger economic growth could increase the likelihood that the Fed will raise rates sooner rather than later. The futures market currently thinks there is a 30% chance of a June rate hike; the odds of a July rate hike are now at 52%.

Against this backdrop, we have generally avoided holding the stocks of large retailers in client portfolios. However, earlier this year, we did initiate positions in two companies we believe are well positioned to take advantage of consumers’ preferences for experiences over things.