Behavioral finance tries to address those psychological traps that are confronted while making decisions under uncertainty, such as those investors make when deciding to buy or sell securities. In the past we have talked about behavioral biases such as myopic loss aversion, recency bias, confirmation bias, sunk-cost fallacy, loss aversion and anchoring. We have also addressed how our emotions can impact our investment decisions.

Over the last 20 years, behavioral finance research has been increasing in scope, because it recognizes that investors rarely behave as would be expected by the rules of conventional finance. For example, the idea of buying low and selling high should make intuitive sense to any investor. The reality is that emotions such as fear and greed often cause us to sell low out of fear and buy high because of either greed (we think the latest high flying stock can fly even higher) or the fear of missing out (FIMO). In fact, recent research shows that the average investor’s decisions are in fact based on emotions rather than logic; most investors buy high on speculation and sell low in panic mode.

At their worst, behavioral patterns can generate negativity or lead to poor decision making by investors. Our previous commentaries discussing behavioral biases have all focused on how they can negatively impact investment performance. However, there are times they can be useful, or even essential. For example, consider optimism. It can lead to a bias toward overconfidence. One could even argue that excessive optimism helped create the housing bubble that was an integral part of the 2008 financial crisis. On the other hand, optimism can provide benefits. It can spur investments in new companies and start-up ventures that can benefit the economy and generate transformative returns for investors.

Another bias that can positively impact performance is the status quo bias, which refers to the desire to continue under existing conditions. This bias can help reduce portfolio turnover. The flip side of the equation is that it can result in missed opportunities and delayed action.

Recently, the CFA Institute polled readers (792 responses) of the CFA Institute Financial News Brief to see which behavioral patterns could prove beneficial when making investment decisions. The results, which appear in the following chart, show that responders believed skepticism was the most important trait. 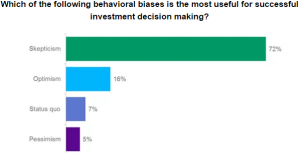 At its core, skepticism represents an attitude that leads one to doubt the truth of something. Being skeptical can lead investors to question, and hopefully investigate, claims made by others and examine whether or not they have any basis. Skepticism also helps us to better control our emotions. While skepticism can contribute to inaction, it also helps us maintain our self-control and keeps us from acting solely on impulse. The lack of self-control is an emotional shortcoming that can cause us to make short-term decisions that are not aligned with our long-term goals. Investors have to be cautious about being too skeptical as this can lead to paralysis and an inability to make decisions. However, healthy and consistent skepticism is largely beneficial.

In some ways, excessive skepticism can lead to pessimism. Pessimists tend to assume that the worst-case scenario is inevitable, which can clearly have negative connotations. At the same time, pessimists can also be detail-oriented and benefit the investment process by assuming the devil’s advocate role in investment decisions.

When reviewing potential investments at BWFA, we attempt to refrain from getting too excited about any investment opportunity. We recognize that maintaining a healthy dose of skepticism can help us avoid mistakes and, hopefully, help us achieve better results.