Hold the Pickles; Hold the Lettuce; Special Charges May Upset Us

In the 1970s, Burger King ran Whopper commercials using the tag line “Have it Your Way” https://www.youtube.com/watch?v=KJXzkUH72cY. When it comes to reporting earnings, many companies take the opposite approach, by presenting earnings “Their Way.” This earnings presentation has also been referred to as EBS or earnings with “Everything but the Bad Stuff.” More commonly such earnings are called either “adjusted,” “non-GAAP” or “pro forma” earnings.

Earnings actually reported in a company’s accounting statements are “GAAP” earnings (earnings reported using Generally Accepted Accounting Principles). It is important to note that companies must present GAAP earnings, but their earnings releases also typically include EBS earnings along with a reconciliation of the two amounts. Most analysts use EBS in their models. Similarly, services such as Yahoo Finance show the EBS amount in the metrics they maintain on companies.

EBS excludes such “non-operating” items as write-offs, acquisition-related charges, restructuring charges, gains or losses on asset dispositions and stock-compensation expense. There are a couple of reasons why management teams believe these amounts should be excluded. First, they are typically presented as being one-time or non-recurring charges. As a result, including them in earnings makes it harder to compare results from one period to the next. Companies also argue that some of these amounts should be excluded from operating results because they represent non-cash charges. While the data is only through 2013, the following chart shows the historical differences between GAAP and non-GAAP EPS for companies in the S&P 500. The difference is typically widest when the market’s performance is weakest. 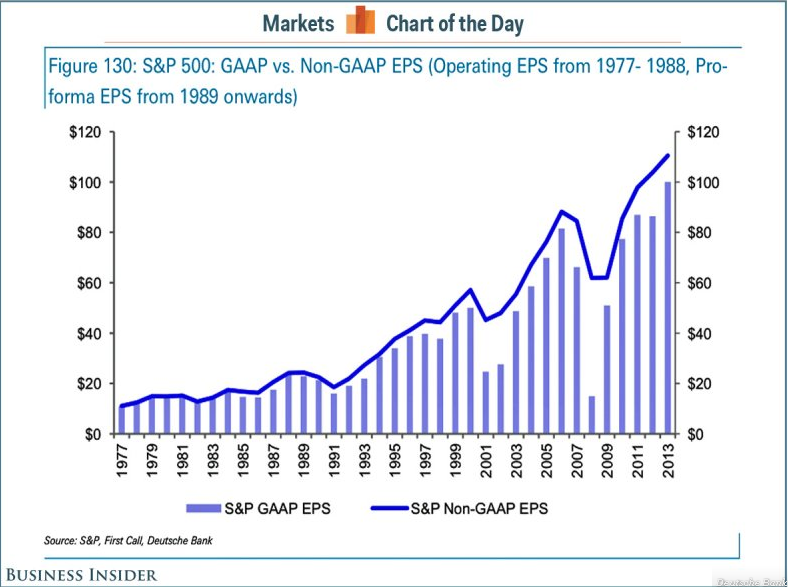 In general, analysts tend to be very supportive of the EBS earnings released by companies. They are normally willing to ignore big write-offs whether they are expected or not. They prefer to focus on operating profits, which are more reflective of the underlying business’ health. As such, they believe they represent a better guide to the firm’s future direction.

When BWFA evaluates companies, we prefer not to take a one-size-fits-all approach. Instead, we look at GAAP and EBS results and make a determination of what matters. Capital allocation is one of management’s most important responsibilities. We do not think a poor decision or an overestimation of demand should simply be disregarded because it happens infrequently. Sometimes, such charges are not infrequent either. If you regularly review financial statements, you may find that some companies take “one-time” charges nearly every quarter. If such charges take place that regularly, then they are clearly not one-time items.

When management decides to take a restructuring charge, it usually promotes the idea that the steps it plans to take will lower costs in the future. If long-term earnings growth includes the savings from restructuring, then restructuring costs should be treated as costs or investments as well.

When a facility is shuttered, or the carrying value of inventory is written down, it is important to remember that the original decision to create the facility or to manufacture the inventory involved a decision by management as to how to allocate capital. If a company is writing off such items too frequently, then it is quite probable that its management is not doing a good job of allocating capital.

As a general rule, the common characteristics of nonrecurring items that we exclude include the following: they do not appear with any regularity; they may appear with some regularity, but they are irregular in amount; or they are not derived from the firm’s central or core operating activities.

The bottom line is that it is best for the analyst or investor to make her own determination of what matters. We believe that independent thought and analysis is the best approach.