Concern About Special Charges Is Growing

When companies report earnings, they typically provide investors with a series of numbers. The most basic earnings measure is accounting profit divided by shares outstanding, which is more commonly referred to as GAAP earnings or earnings under Generally Accepted Accounting Principles. As the current economic expansion has progressed and the bull market’s duration has lengthened, companies have increasingly reported “adjusted,” “pro forma,” or non-GAAP figures. This latter figure represents the company’s best estimate of things that came up during a quarter or year that, based on the company’s judgment, were not part of the company’s normal course of business. The net impact of this type of reporting is that non-GAAP earnings are typically higher than GAAP earnings.
Companies defend this practice by saying that non-GAAP financial information is valuable to investors. The Securities and Exchange Commission (SEC) requires companies to explain why such information is useful. The most common answer is that it provides a better explanation of underlying performance. In some cases, this is clearly true. For example, if a hurricane negatively impacts a business, it can make sense to look at results excluding the unexpected loss. On the other hand, some businesses exclude amounts such as the cost of building new facilities, or the cost of stock-related compensation. It is harder to argue that such amounts should be excluded.
Originally, amounts were excluded from GAAP results because they were nonrecurring or infrequent. However, some companies take restructuring charges quarter after quarter and treat them as special items. In our view, when an item occurs regularly, it is harder to argue for its exclusion. Like regular restructuring charges, stock-based compensation can occur each and every quarter. This makes it difficult to justify that such amounts should be excluded when presenting operating results.
Warren Buffett addressed this issue in his annual letter to shareholders. He wrote that excluding stock-based compensation is the “most egregious example” of “managers telling their owners to ignore certain expense items that are all too real. If compensation isn’t an expense, what is it? And, if real and recurring expenses don’t belong in the calculation of earnings, where in the world do they belong?”

We last discussed this topic in June 2015. Since then the gap between GAAP and non-GAAP earnings has widened. S&P Dow Jones Indices applies a consistent approach to determining operating earnings. They exclude items such as discontinued operations and extraordinary items that are deemed to be truly extraordinary. However, they include items like stock-based compensation. As shown in the following chart, pro forma earnings in 2015’s fourth quarter were 29% higher than S&P operating figures, the biggest absolute difference since 2008’s fourth quarter. 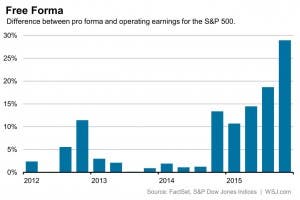 While it is easy to follow the company line, doing so can hurt returns. Research performed by quantitative analysts at Evercore ISI looked at the performance of companies with unusually large differences between GAAP and pro forma results. These analysts found that across a wide variety of investing styles companies with big GAAP gaps tend to underperform in the months following such earnings reports.  The underperformance was most noticeable for highly indebted companies that need to generate adequate cash flows to pay their debts. Shares of GAAP-gap companies with slowing sales and with sales growth below historical levels also fared poorly. Companies in these latter two categories with low or non-existing gaps delivered much better returns. Ironically, companies may be right in their view that pro forma results are valuable. However, they might be valuable in a different way than the company wants investors to believe.

At BWFA, our investment process includes a review of a company’s GAAP financials. We do not limit our work to a review of pro forma results. We also do not exclude amounts simply because they are excluded in the company’s earnings release. While a non-GAAP gap alone may not cause us to pass on an investment, it does factor into our decision-making process.