The current economic recovery is often referred to as the jobless recovery. Although the unemployment rate has fallen from 10% to 6.6% over the last four years, the related data also shows that many Americans have stopped looking for work altogether. After increasing steadily for decades as women and baby boomers entered the market, the labor force participation rate (LPR), which measures the workforce’s size relative to the population in the same age range, has been declining. In fact, the LPR currently sits near a 36-year low of 63%. 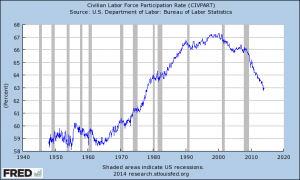 At first glance, the drop is disconcerting. However, it might not be nearly as bad as it appears. In 2006, five Federal Reserve economists published a paper on labor force participation, which was falling even then. They predicted that by 2013, the annual average would fall to 63.3%, which was in line with the actual result. More recently, we reviewed a Morgan Stanley study attributing 70% of the decline in participation that’s occurred since December 2007 to demographic factors – largely the U.S.’s aging population.

Aging baby boomers have started to retire. However, they are living longer than their parents. In addition, a Boston College analysis found that, in 2000, the 36 to 54 age group was dominated by baby boomers creating a “boomer bulge” that is not expected to work its way through the economy until 2020. It is estimated that 1.5 million baby boomers will turn 65 in each of the next 15 years. These individuals are not likely to come back to work no matter how much the economy improves.

At a minimum, at least a portion of the fall in the LPR could have been anticipated. The above information provides a counter argument to those who point to the LPR’s decline as a reason that the unemployment rate is misleading, or that it masks the true picture.

When investing, it is important to consider both the positives and the negatives associated with potential investments. At BWFA, we consider both sides of the story. While we think about the potential gains that may arise from an investment, we also consider the potential risks. It is important to remember that failing to take both sides of the argument into account increases the risk of bad decisions. It is dangerous to take into account only information that supports an investor’s underlying thesis.