Thoughts on the Sluggish Economic Recovery

As many investors know U.S. gross domestic product (GDP) declined in the first quarter. That marked the third quarter in which the economy contracted since the current recovery commenced. This year’s decline has been attributed to a number of one-time factors ranging from the weather to flaws in the methods the government uses to account for seasonal fluctuations. If weather were the only cause of the weakness, it is likely that the second quarter’s interim data would be more robust. For example, last Wednesday’s report showed that May’s retail sales increase was 1.2%. This was the second straight monthly gain as April’s reading was raised from 0.0% to 0.2%. While sales growth is a positive, the pace of growth is still relatively weak. Similarly, more people are working, but employees are not getting much in the way of raises.

The unanswered question is, “Why is the recovery so sluggish?” While there are no certain answers, the consumer is the most likely cause. Although gasoline prices are meaningfully lower and wages have started to trend higher, consumers have been somewhat hesitant to spend. Rather than spending, consumers are saving more. Since November, the U.S. savings rate has climbed by 1.1% to 5.6%.

While the current 5.6% savings rate is an improvement relative to the recent past, as the chart below shows, it is low historically. In fact, prior to the consumption binge of the late 1990s, the savings rate averaged modestly less than 10%. 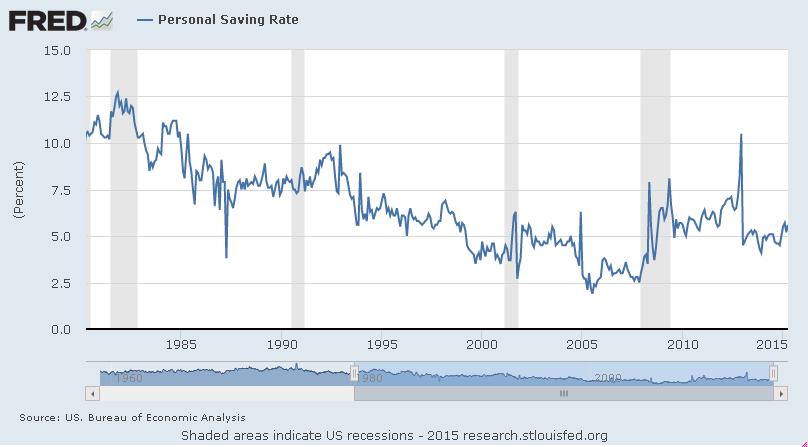 Over the long term, it seems likely that consumers are going to have to increase savings in order to have enough to get by in retirement. They have not been spending their savings from lower gasoline prices, which could be benefiting savings rates.

We are also living longer (according to data from the World Bank, the average life expectancy of someone born in the U.S. has increased from 70 in 1980 to 77 in 2013). Whether more is allocated to the stock market or fixed-income investments are increased, individuals who are hoping to retire comfortably are going to have to save more.

At the same time, U.S. home ownership is currently about 63.8%, which is modestly below the long-term average of 64%-65%. Millennials (those born from 1982-2004) who are members of the workforce typically have little money saved. If these individuals want to become homeowners rather than tenants, they are going to have to increase their savings rate.

While we do not expect interest rates to stay at their low levels, we do think it will take several years before rates normalize. Against this backdrop, we have long favored stocks paying high dividends over bonds.  At the same time, we have been more cautious in allocating money to longer term bonds, as the value of such bonds will fall when interest rates move higher.