The Impact of Changing Demographics On The Housing Market

Recent trends typically have little impact on BWFA’s search for potential investments or our analysis of securities we already hold for our clients. We are more interested in trying to identify long-term or secular changes to the economy or demographics. This fits with our goal of identifying stocks that can be held for three-to-five years, if not longer. In our opinion, some U.S. housing market data indicates changing demographics could potentially have a long-term effect on the type of housing in which people want to live. This has led us to look for investments that might benefit from such changes.

BACKGROUND
In short, it appears that a generational shift in people’s view toward housing is underway. This change is being driven by some of the following factors: the size of the down payment required to purchase a home; credit conditions; and lowered expectations about the viability of home ownership as an investment. Lingering scars from the last severe down-cycle may also be causing a mind-shift among 20- and 30-somethings who want a more flexible and mobile lifestyle than earlier generations. According to research by the Joint Center for Housing Studies of Harvard University, homeownership rates among Gen Xers—now mostly in the 35-44 and 45-54 year-old age groups—have fallen further than those of any other age group. They currently sit 4%-5% below rates among same-aged households 20 years earlier.

In addition, people are getting married later and waiting longer to have children, which negatively impacts housing-related size requirements. The baby boom generation is also getting older and the oldest members are looking to downsize. As a result of these shifting preferences, Americans are increasingly shifting away from the single-family home, which has been a cornerstone of our culture, toward multi-unit residences. In many ways, multi-family housing or rentals make considerable sense. They also provide a more efficient way to utilize space, especially within urban centers that are increasingly attracting residents that formerly lived in suburbia. 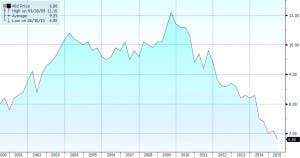 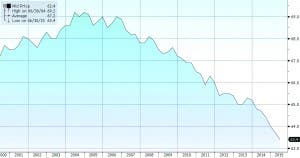 In 2015’s second quarter, the number of U.S. households increased by 1.6 million from a year earlier, the third consecutive quarter of relatively strong growth following years of tepid gains. However, the net increase was entirely due to new renters (up 2.0 million), as the number of owner-occupied households declined by 400,000. More broadly, since 2004, on balance, the number of households who rent jumped by 9 million. On the other hand, the number who own fell by 2.5 million since 2006.

Many of these new households are likely to be seniors living alone or young unmarried adults living either alone or together to share living expenses. These “selfies” are more likely to rent than buy homes. The percentage of the adult population 16 years or older who are singles has been running around 50% since June 2014. That is up from 37% in the mid-1970s.

The Pew Research Center reports that 36% of those aged 18-31 lived in their parents’ homes as of 2012, the highest share in decades. Pew attributes this trend to declining marriage, rising college enrollment and declining employment.

Student loan burdens provide another obstacle to home ownership. According to Pew’s research, 37% of households headed by an adult younger than 40 have some student debt. In addition, households carrying student loan debt typically have more overall debt obligations (e.g., car and credit card loans) than those without them. They are also spending a lot on rent. As a result, it is harder to save for a down payment.

These changes are happening even though, according to a new report from Zillow Group Inc. which tracked data back to 1979, rental affordability has steadily worsened. In 2015’s second quarter a renter earning the median income in the U.S. spent  0.2% of her income on an apartment, versus 29.5% a year ago. From 1985-1999, the average was 24.4%. Higher occupancy rates also make it easier for landlords to increase rents. Since interest rates remain low, mortgages remain relatively affordable. U.S. buyers devoted 15% of their income to mortgage payments, which is below the historical average of 21%. Strict lending requirements and tight inventories have kept manyfamilies in the rental market.

Older Americans are helping to keep the homeownership rate as high as it is. Many baby boomers are now in the 50-plus age group which is when homeownership rates are high. However, once they decide to downsize, they are more likely to rent than buy. One reason may be that renting is easier than owning a home. There is no longer a need to pay property taxes, pay for and arrange for maintenance, plumbing or electrical. If you rent, it is also likely you will not have to pay for grass cutting or snow removal. Retirees are also likely to reach a point where they no longer can or do not want to go up and down a flight of steps.

Based on many of the above factors, we previously invested in a real estate investment trust (REIT) that primarily rents apartments in areas with increasing job opportunities for Millennials. We have to pay attention to building trends and occupancy rates, however. For example, in June, ground was broken on the most multi-family housing units since 1986. The number of permits issued for units for which construction has not even commenced has also swelled.

We prefer investing in REITs with the potential to grow distributions over time. Should the construction of too many multi-family dwellings cause vacancy rates to rise, we would consider an alternative. Similarly, we think a REIT focused on the assisted living industry would be a good fit for client portfolios. According to the aforementioned Harvard study, by 2025, “the large and growing population of seniors is likely to drive up demand for alternative housing arrangements that provide a combination of affordability, accessibility, and supportive services.” By the time this article goes to publication, we also expect to have added a REIT focused on the assisted living industry.