In February, I met and had lunch with Joe Davis, Vanguard’s Global Chief Economist, and he was kind enough to send me his latest thoughts on his forecast of the US Economy.

A sharp contraction, then an upswing

In only a few months since our meeting in February Rob, COVID-19 has spread around the world. The extreme measures being taken to protect us, to combat the disease’s spread, should be positive for public health. But such a step necessarily involves a trade-off. In appropriately prioritizing human health, we must shut down large swaths of the economy, closing schools and businesses and limiting human interaction.

Having to do so makes it unfortunately clear that a global recession is at hand.

A deep (and we hope short) U.S. recession

Given increased efforts to contain the spread of the coronavirus, we anticipate a sharp (but we hope short) contraction in the U.S. economy, which likely has already entered recession this month. The coming months are likely to witness a profound fall-off in the real economy.

For some time, we have been estimating the likely impacts of the virus’ spread through several channels, including reduced trade, restrictions in supply chains, tighter financial conditions, and, perhaps most significantly, social distancing measures. This latter effect is leading to a profound decline in consumer spending in the “face-to-face” sectors of the economy, namely hotels, restaurants, air travel, and related activities. We expect consumer spending in the months ahead to decline at the sharpest pace since at least World War II, with clear impacts to employment.

As shown in the illustration, real GDP is likely to contract in the coming quarter by nearly 17% on an annualized basis. This would mark the deepest quarterly decline since at least the 1950s. This will be a trying time for all of us, and certainly for the U.S. economy.

We expect, however, that this could also turn out to be among the shortest recessions in our history. Importantly, we assume that the need to significantly restrain activity, such as the closure of non-essential businesses, will dissipate by late in the second quarter. Under such a scenario, and with aggressive fiscal and monetary policy measures, we would foresee a rebound in growth in the third quarter to mark the end of this sharp yet short recession.

A sharp but short contraction

A bear market in stocks, and a ray of light

Financial markets have sold off significantly over the last several weeks, with eye-watering volatility. While we noted in our annual economic and market outlook that there was an elevated risk of a correction in the stock market, the speed of this bear market has certainly taken me by surprise.

A positive side, however, is that the long-term picture has brightened for equities. As the illustration shows, the recent sharp downturn has brought returns more in line with the previous outlooks provided by our Vanguard Capital Markets Model®. As you can see, over longer periods we’ve had a good record of anticipating where future stock returns would be, on average, over the next ten years. Our forecasting accuracy results from our framework that is based, in part, on stock-market valuations. Until the pandemic, valuations were elevated, explaining why we expected muted stock returns.

A ray of light is that, looking over the next ten years, our stock market outlook is starting to improve. The reason? The role that current valuations, which have contracted in the recent sell-off, play in our long-term forecast. Put simply, the price of most equities has become much lower than it had been, giving equities more room to grow before they reach what we’d consider to be their fair value. The theme broadly holds true for ex-U.S. equities. A similar dynamic also occurred in 2009, when the global economy was in a deep recession and stock prices were low. 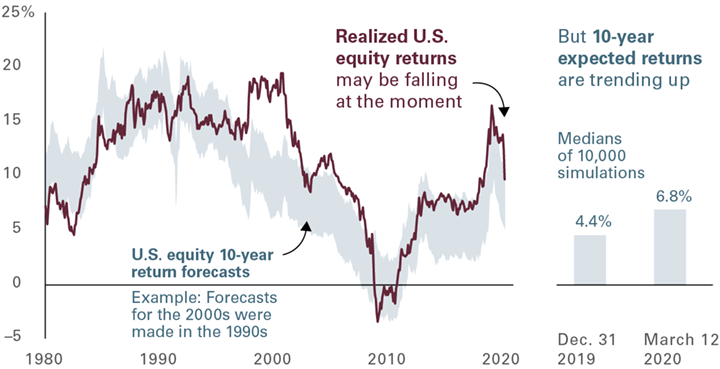 The months ahead will be trying times for all of us, as consumers, as investors, and as people contending with the virus. But I have faith that there are better days ahead.
Joe Davis

In times like this I am looking for the best minds in the industry and Joe is a partner and levelheaded economist and has similar thoughts to myself on how and when the US recovery will happen. Taking this forecast and your financial plan into account we are better able to project into the future realistic expectations for our clients.

If anyone has any questions or would like to set up a virtual call BWFA is ready to help. I believe the light at the end of this long dark tunnel is becoming visible. It is important to stay the course during these very difficult times, but we will come through this together.