March was really awful. That’s all you can really say about the month. The COVID-19 crisis unfolded in Europe and the U.S. suddenly and accelerated very quickly sending markets into a tailspin not seen since 2008. There was literally nowhere to hide due to the sudden potential existential threat of the worldwide “Coronavirus Pandemic”. A well-diversified portfolio of high-quality investments has been successful in reducing volatility and limiting losses.

We’re all dealing with it; but reading some of the reports out of New York hospitals I can’t help but be upset and angry and inspired and hopeful all in the same instant. People on the front lines are putting themselves at mortal risk every day knowing they cannot save everyone they treat that day – if you’re there, I’m thinking about you, praying for you, all the while knowing how little that really helps you. I’m going to try and find ways (besides staying home) that actually does help you.

Not to put on rose-colored glasses but amidst the day-to-day dealing with this crisis there have been some unexpected positives that have helped me cope;

Coronavirus will pass and so will the pain that it brings with it. For now, let’s focus on how we get through it and hopefully, by doing the things that really matter, we (all of us) emerge even stronger.

To help illuminate what the road ahead may look like, I looked at two aspects of how market recoveries have behaved in the past. The first relates to the type of event that triggers a drawdown while the second relates to a drawdown’s duration and how that correlates to the duration of its recovery.

When trying to understand drawdown events, it is helpful to categorize them into two types; internal and external. Internal events are those that are core to the economy (e.g., financial crisis, dot-com bubble, taper tantrum, etc.) while external events have nothing to do with the economy but may precipitate an economic reaction none-the-less (Gulf war, 9/11 attack, Coronavirus). The crisis we’re in today is external and so it may be instructive to look at past external events and their impact on markets.

The figure below illustrates the path the Dow Jones Industrial Average took beginning on the first day of the month in which the events occurred respectively. 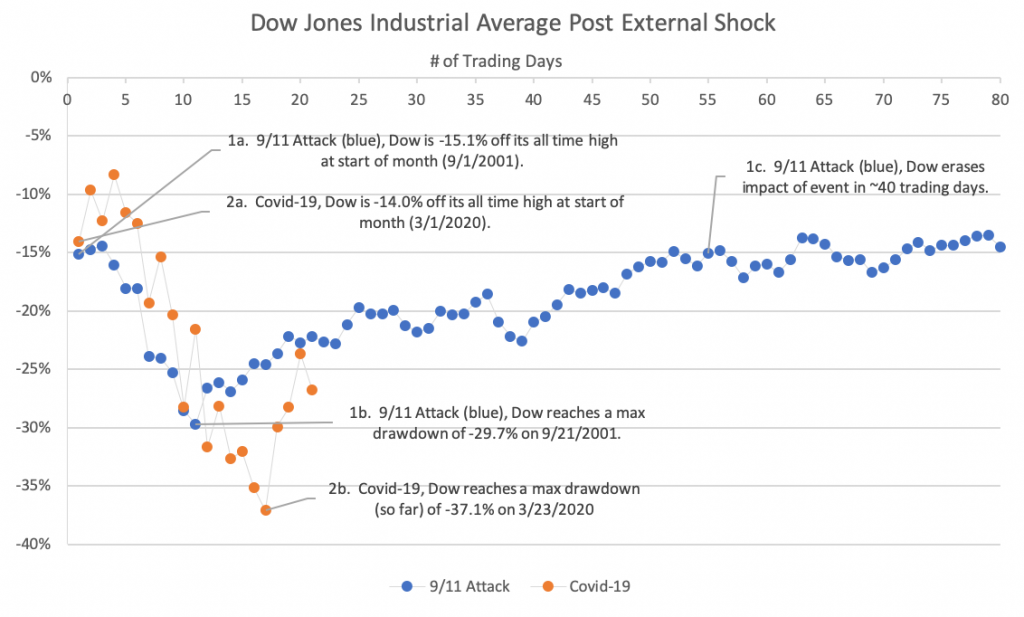 There are a few things that jump out from the chart above:

Those are pretty striking similarities but what’s perhaps most interesting is that in the case of the 9/11 attacks, the Dow erased the effects of the attack in about 40 trading days (by 11/13/2001). It’s worth noting that the Dow did not recapture its high again until 2004 but that was a result of internal events (dot-com aftermath, accounting crisis), not the attacks themselves.

I’m not saying the same scenario is going to play out now but if you lived through the 9/11 attacks), I can tell you that the fear factor, the uncertainty, and the anticipated pain was much higher then than it is now. It is worth noting then that perhaps the cause of a drawdown event tells us more about its duration than does its depth.

The figure below looks at the seven worst market drawdown events over the past several decades (1998-2020). Each set of bars is ranked top/down with the deepest drawdown at the top. The red bar shows the number of months (in parenthesis) it took the market to go from peak to trough and the depth of the drawdown shown as a percentage. The green bar shows the number of months it took the market to recover by recapturing its previous high. 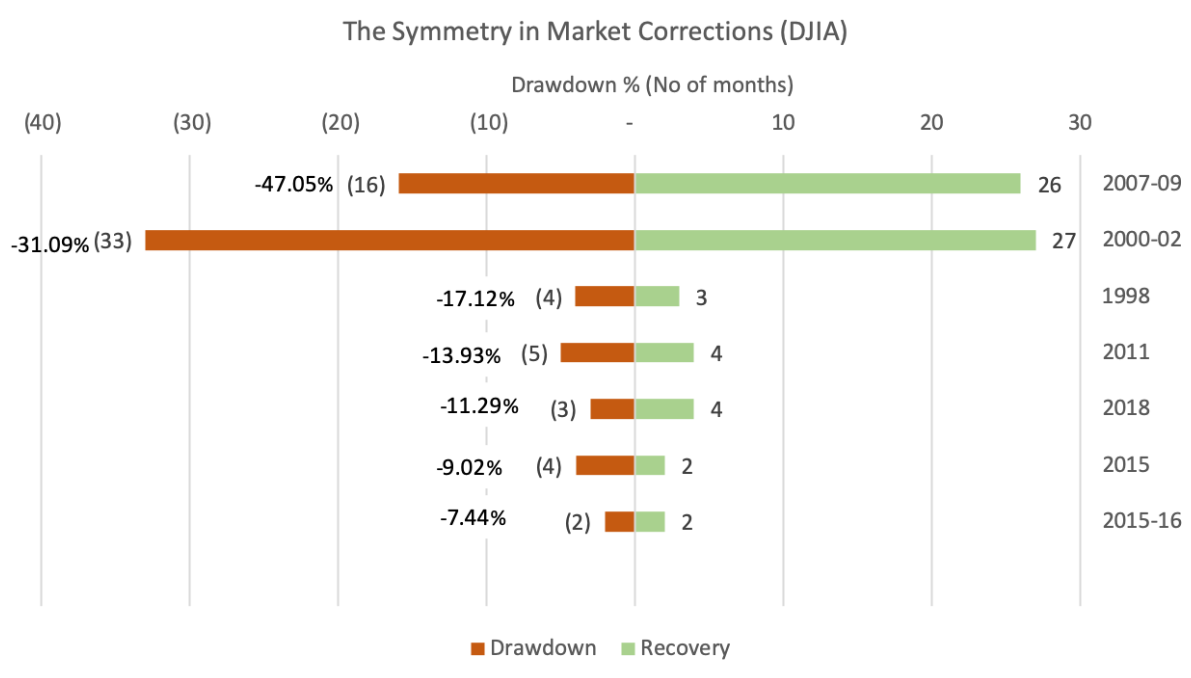 You have to admit, it’s a beautiful chart. It shows very clearly that the market’s recovery duration is symmetrical to the duration of its drawdown (not necessarily the drawdown’s depth). For example, while the drawdowns in 1998 and 2015 had the same duration, the depths were materially different, yet both recovered in about the same number of months.

What may be different about this crisis is that the depth of the drawdown is out of whack with the time it took to achieve is (so far, the current drawdown is two months in duration and has already achieved a maximum of -32%). Is that going to matter or will the pattern above hold this time around; where no matter how long the drawdown duration will be (2 months or 20 months) the recovery will take about as long.

The evidence certainly seems to suggest the pattern should hold and that should give investors some comfort assuming we have in fact already seen the bottom.

Regardless of duration, however, in a world where every market is at a deep discount, the most important thing is to be patient and try to think long term. At BWFA we are here to help you and assist you in your financial goals. If you have any questions please feel free to call us to set up an appointment over the phone/Skype/Zoom to discuss in detail. We will get through this together, even stronger, but we must remain confident in each other during these difficult times.