Gasoline prices have fallen considerably from their year-ago levels. Against this backdrop, consumer spending continues to disappoint. It seems households are choosing to save the amounts they are saving at the pump instead of spending it on goods and services. As a percentage of disposable income, personal saving was 5.8% in February and 5.5% in January, marking the third consecutive monthly increase. 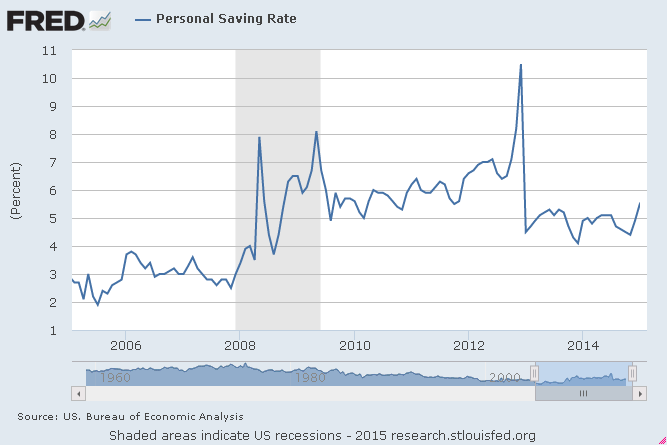 From a broader perspective, the US economy’s fundamentals are supported by a strong labor market, falling fuel prices, low interest rates and a consumer base that has more savings and confidence than at any time since the last recession. At the same time, retail sales data has disappointed, as consumers have been increasing their savings. In fact, US sales data fell unexpectedly for a third straight month in February as harsh winter weather, particularly in the northeast, likely kept consumers out of automobile showrooms and shopping malls.

Another factor that may be limiting consumer spending is higher healthcare costs. After five years of historically slow growth, analysis by the Altarum Institute research group, which is based on preliminary government data, indicates healthcare spending grew by 5% last year, up from 3.6% in 2013. If this finding is confirmed by the final data, the rise in 2014’s healthcare spending would represent the biggest jump since before the recession.

The latest data through January show that the percentage of current-dollar consumption for gasoline plunged from last year’s high of 3.2% to 2.1% in January. On the other hand, the percentage allocated for healthcare goods and services rose from last year’s low of 20.0% in March to 20.6% this past January.  (It should be noted that these figures including amounts paid for both by insurance and government programs, as well as out-of-pocket costs.) This indicates that a portion of the savings on gasoline is being spent on healthcare. Some consumers are also taking advantage of lower gasoline prices by driving more.

The bigger question is whether or not the change in the savings rate is permanent. Ian Shepherdson, chief economist at Pantheon MacroEconomics, believes the jump in the savings rate is only temporary and that spending should surge over the next few months. Pantheon believes that there is about a six month lag between the time that gasoline prices shift and when consumers respond to lower fuel prices. This response is longer than the markets seem to think it should be. If this view is right, spending is likely to surge over the next few months.

In the first quarter, the S&P 500 Index only advanced 0.95% on a total return basis; February was the only month in which the S&P generated positive returns. At the same time, Wall Street analysts have been lowering their earnings and revenue estimates due to the impacts of lower oil prices and a stronger US dollar (a stronger dollar lowers the amount of earnings generated in US dollar terms for US-based multinationals). When estimates fall, the market’s valuation becomes more expensive on a relative value basis. Uncertainty about interest rates also adds volatility. In addition, we note that it is harder to find attractively valued securities. In this environment, we remain focused on the consistent application of our investment process, as we believe this approach will add the most long-term value to client portfolios.