When evaluating companies for potential investment, two of the most important aspects are valuation and management quality. Although our research process is based on bottom-up fundamental analysis, it still requires a considerable amount of qualitative assessment. In other words, we do more than analyze the numbers when making a decision to buy, hold or sell a security; we also perform qualitative analysis of the management team.  Both are essential components in the investment process.

Typically, our evaluation of management starts with the numbers, as they are an integral part of the process. By analyzing financial data, we can gain insight into how effectively management allocates capital. Numbers can also help us determine if the information presented in a company’s financial statements represents a true picture of the company’s financial performance. It is also important to evaluate profit margins. We prefer companies that do not simply chase incremental sales for the sake of short- term revenue growth. We want to see  that an increase in sales generates higher operating cash flow.

Capital allocation is senior management’s most important fundamental responsibility. While we do not question their intentions, our main concern is that a CEO may lack the knowledge required to effectively allocate capital. The objective is to build long-term value per share. The emphasis should be placed on building value for the long-term and letting the stock market reflect that value. Companies that dwell on boosting their stock price in the short term often make decisions that run contrary to the principle of enhancing long-term value. If companies were able to consistently allocate capital effectively, reports of restructuring plans, cost overruns, and failed projects would be more infrequent.

It is important to have insight into whether a company may be growing its asset base too quickly. Academic research shows that rapid asset growth often leads to poor shareholder  returns. Correspondingly, companies that shrink their asset base (for example, through divestitures, sales or spinoffs) may meaningfully increase value per share. Capital allocation is a dynamic process, so the answer to nearly all capital allocation questions is, “it depends.” Intelligent capital allocation requires an understanding of the long- term value of potential opportunities as well as knowledge of the value of a firm’s individual assets. The willingness to sell assets when they are worth more to others is also required.

Successful capital allocation means converting inputs, including money, things, ideas and people into something more valuable than they would be otherwise.  If a company successfully allocates cash, it means that $1 invested in the business is worth more than $1 in the market.  This occurs when the present value of the long-term cash flow generated by an investment exceeds its initial cost.

As noted above, a qualitative assessment of management is also a critical part of evaluating a company. Philip Fisher is considered one of the greatest investors of all time. Perhaps the best-known of Fisher’s followers is Warren Buffett.  Fisher practiced long-term investing, and strove to buy great companies at reasonable prices. Fisher’s famous “Fifteen Points to Look for in a Common Stock” from his book Common Stocks and Uncommon Profits provide a qualitative guide to finding well-managed companies with growth prospects. According to Fisher, a company must qualify on most of his 15 points to be considered a worthwhile investment. Included among Fisher’s points are the following:

In order to answer questions such as these, BWFA reviews the company’s publicly filed proxy statements to review management incentives and the appropriateness of compensation. We also listen to management conference calls (or read the related transcripts). Our research includes internet searches for information related to key members of the management team. We also try to answer the following questions: Is management’s strategy and approach consistently applied? Do management’s priorities change frequently? Does management remain true to the company’s stated mission statement?

An example of how management quality and approach can have an impact on returns can be seen by comparing two companies in the oil and gas industry: Chesapeake Energy (CHK) and Helmerich & Payne (HP)1. Aubrey McClendon was formerly CHK’s CEO. Under Mr. McClendon’s leadership CHK accumulated leading positions in many of the US’s largest unconventional oil and natural gas basins. However, in our view, Mr. McClendon was a poor capital allocator. The company constantly had to borrow to support its growth efforts. It also used considerable financial engineering to obfuscate the company’s true financial picture. Additionally, the company’s compensation policies enriched Mr. McClendon even when the company’s financial performance lagged. The shares have under performed considerably after reaching an all-time high of $62.39 in 2008’s second quarter. Ultimately, activist shareholders forced Mr. McClendon’s departure.

On the other hand, the shares of Helmerich & Payne (HP) – which operates rigs used to drill oil and gas wells in many of the same locations in which Chesapeake owned meaningful acreage – has strongly outperformed CHK over the long term.  HP is generally considered a well-run company with many long-term employees. It only allocates capital to build new rigs when it can secure at least a three-year contract before the rig is built. The company would not enter into new contracts with Chesapeake during Mr. McClendon’s tenure, because he always wanted a break on rig rates. CHK also had a reputation for taking longer than peers to pay its bills. Given the relative quality of the two management teams, HP’s out performance is hardly a surprise.

A key determinant of share price performance is management’s ability to allocate resources effectively. If a company achieves a higher return on its reinvested profits than the market has expected, its shares will rise, almost regardless of what happens to revenues. A great business with superior long-term economics run by ethical operators whose ownership culture is pervasive throughout the organization  is likely to generate superior returns. Assessing management quality is a critical element in finding such investments. 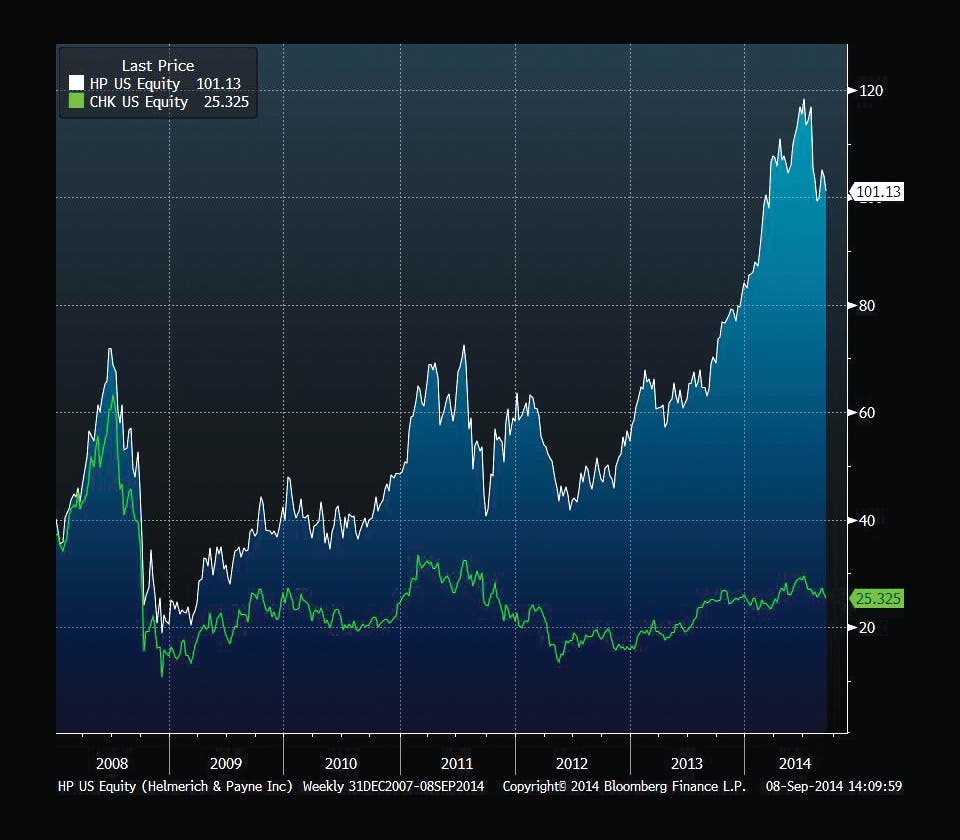