From time to time, there are headlines saying long-term investing is “dead.” The evidence from major stock exchanges highlights that the thinking of investors has become more short term over time, at least based on the average holding period of stocks. In the US, the average holding of a share on the New York Stock Exchange (NYSE) was about seven years in 1940. Today, the average global holding period is under three months (see chart below). This phenomenon is only partially explained by the growing presence of short-term, technically driven investors.

In fact, we believe that short termism is unequivocally one of the most serious behavioral biases investors must overcome in their efforts to produce market-beating investment returns. One’s innate preference for short-term rewards – or instant gratification – rather than delayed gains has long been reported by psychologists as a feature of the human condition that extends to many elements of our behavior.

One of the elements causing investors to take a short-term approach is volatility. The common way in which volatility is measured is called standard deviation. If you are not familiar with the term, think of it this way: Assume you are given a group of numbers and are asked to calculate the average value (mean) of those numbers. Standard deviation measures the difference between each data point and the group’s mean; i.e., it tells us how spread out the numbers are.  The standard deviation (or volatility) of the returns on stocks held in a portfolio is a common measure of risk.

Instead of thinking of risk in terms of volatility, many value investors think of risk as the possibility of permanent loss of capital; i.e., the chance that an investor will suffer a loss when investing in a particular security. By holding stocks for longer periods, investors can actually see both types of risk reduced. 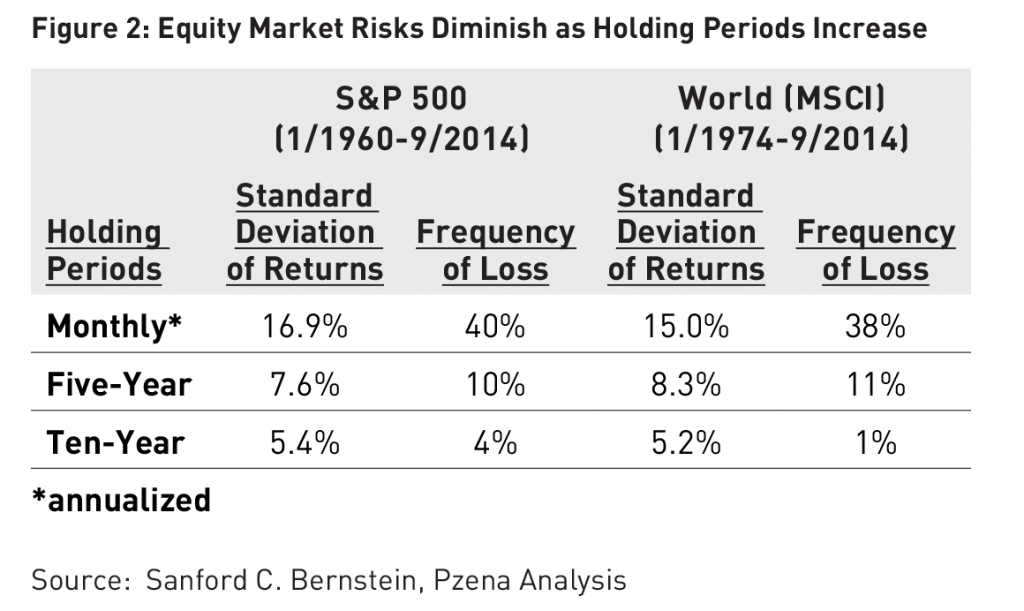 As can be seen in the above table, a longer holding period results in a narrower range of returns. It also reduces the risk of loss. In addition, it is important to remember that today’s stock price represents the market’s best guess of a company’s long-term value. This guess is far from perfect. In fact, the tendency to place too much emphasis on short-term rather than long-term news can cause the share price of a given company to fluctuate much more than it should.

Online stock quotes include both 52-week high and 52-week low prices. This range can be quite wide. For example, shares of Apple (Nasdaq: AAPL)* closed as low as $71.40 on January 30, 2014 and as high as $119.00 on November 26, 2014.  The high price is more than 65% greater than the low price. While no one can expect to buy every (or even any) stock at its low, the size of this disparity is indicative of the opportunity that the general market’s short-term thinking can present to investors with a long-term approach.

It is unlikely that the intrinsic value of Apple increased so dramatically over a 10-month period. Stock prices tend to overreact on the way down as well as the way up. Long-term investors can use this volatility to their advantage, as short-term dislocations create opportunity. Additionally, when investing for retirement, and later when funds are withdrawn from a retirement account, it is important to protect (and hopefully grow) principal. We believe the data depicted above support our long-term approach. Investing for the short-term can lead to increased volatility and a greater risk of loss. When investing client funds, we believe a long-term holding period is more conservative and reduces the potential of loss, which should add long-term value to client accounts.

* Shares of Apple are currently on BWFA’s “Buy/Hold” list and are held in some client accounts.