Fed Statement About More Than Patience

On Wednesday, Fed policy makers dropped the word “patient” from their official statement on monetary policy. For months, many members of the financial media have been fixated on when the word “patient” would be removed from the Fed’s statement. On the surface, the Fed raised the possibility it could start increasing rates as soon as its June meeting.

Going into the meeting, many were expecting the Fed to provide signs that rates could start increasing in June. Based on the market’s reaction after the meeting, rates are not expected to start moving higher until at least September.

The market rallied on the news, and on Friday, the S&P 500 was within a few points of its record high close of March 2. However, in our view, the market’s performance following the announcement has been driven by other factors. Recent economic data has been mixed as growth has slowed somewhat. Export activity levels have also retreated. The Fed now expects gross domestic product to grow 2.3-2.7% in 2015, 0.3% lower than its December estimate. In the Summary of Economic Projections, Fed members also recognized that inflation will take longer than expected to return to target – this is not anticipated until 2017.

As a result of these factors, the Fed lowered its projections for the year-end fed funds target by 50 basis points (bp). The median estimate for the fed funds rate is now 50-75 bp for 2015 and 175-200 bp for 2016. These figures are more in line with market expectations. These lower rate projections indicate the Fed will remain patient in removing its accommodative policy, even if its intentions are no longer explicitly stated.

The other important factor in this equation is the strength of the US dollar. Following the Fed’s announcement, the dollar retreated from its 12-year highs relative to the euro. The dollar’s value relative to other currencies also declined. 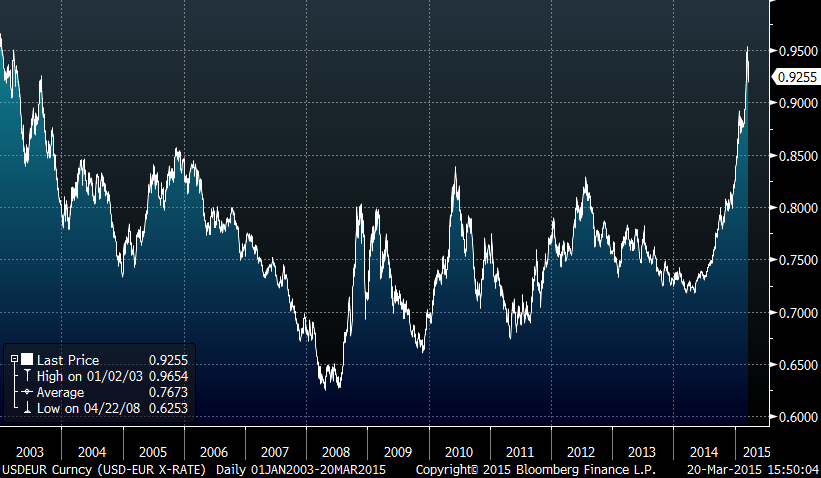 Interest-rate expectations have an important impact on exchange rates – U.S. interest rates are likely headed higher. Since increased rates are a sign of economic strength, higher rates should translate into a stronger dollar. At the same time, monetary policy in Europe and Japan is much easier, as those regions are looking to stimulate economic growth. This divergence in monetary policy will likely continue to support the dollar over most foreign currencies for some time.

We do not believe the U.S. dollar’s rally is over. While U.S. growth is expected to be somewhat slower than was previously anticipated, the outlook remains stronger than that of other regions. This may provide some benefit for U.S.-based companies that primarily conduct business in the U.S. as well as those foreign-based firms that export a material amount of goods to the U.S. We continue to look for attractively valued securities that are well positioned to benefit from this backdrop. At the same time, the Fed’s policy has become more data dependent and slightly less transparent. As a result, we expect the market activity to be more volatile than it has been over the last few years.