For my 50th birthday, my wife gave me an Ancestry DNA test.

I had a general knowledge of the more recent branches of my family tree, but was always curious about discovering more. My parents told me that I was English, Irish with some Native American roots as well.

Excited to learn more, I received a kit with simple instructions for registration and submission of a DNA sample. It took only a few weeks for me to receive my results! As I expected the results indicated a high percentage of English and Irish heritage, along with the unexpected discovery of Scottish, Scandinavian and Eastern European Jewish connections. Alas, there was no mention made of my Native American heritage.

Another exciting part of the test had Ancestry identify potential DNA matches, linking me to any of my second, third and fourth cousins around the world. Not surprisingly these were individuals I had never heard of before. With this new information, I now have the tools to begin filling in some of those empty branches of my family tree.

Ancestry does make a point of disclosing that its DNA results provide genetic ethnicity estimates. So, while the test seems to debunk the story about our family’s Native American roots, it corroborated my English and Irish heritage as well offered me an exciting new connection to a Scottish, Scandinavian & Eastern European Jewish background!

I must not be the only one excited and intrigued about more clearly developing a sense of who I am and where I came from. Ancestry.com went public in 2009, then was taken private a few years later valued at $1.6 billion. Earlier this year they received another $1.0 billion investment to fund the continued growth of their enterprise.

While this story was not meant to showcase an investment opportunity, it is interesting to think about how technology can now do what was previously unimaginable, certainly highlighting the rapid increase in our awareness of how interconnected we all are.

Here at BWFA, we deeply appreciate our close relationships with each and every client and like Ancestry, strive to know what makes you, our clients, uniquely you! 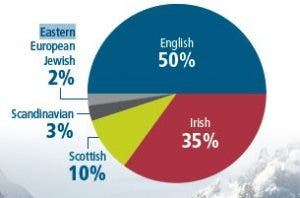