In 2014, the number of firms targeted by activists reached a record high. According to a study co-produced by the research firm Activist Insight and law firm Schulte Roth & Zabel, activists, mostly hedge funds, targeted 344 companies last year, up from 291 in 2013. Let us take a brief look at what is driving this increase as well as whether it is good or bad for investors. 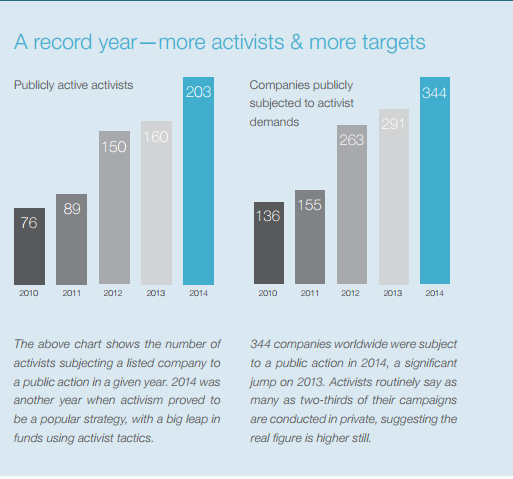 It is important to note that nearly any company is a potential activist target. After all, even Apple[i], which is the world’s largest company by market cap, was targeted by Carl Icahn, beginning in 2013. In the 1980s and 1990s, activist activities centered on stripping companies of assets as leveraged buyouts (LBO) were in vogue. (In a leveraged buyout, the LBO firm issues considerable debt to fund the purchase of another company and then sells off many of the pieces in order to try to generate a profit.) Many of today’s activists are very different. They often attempt to improve firms’ boards and work with other shareholders to help garner additional support. These investors raise longer-term capital, which also helps stretch their investment time horizon.

It is important to consider that in some ways today’s activists help fill a governance void that hampers many of today’s public companies. A growing portion of the company shares are held by index- and exchange-traded funds that mimic the market and take little interest in how firms are run. Similarly, the conventional mutual and pension funds that oversee diversified portfolios dislike becoming too involved in how firms are managed. These factors have likely weakened corporate governance, as the largest shareholders of many firms are essentially little more than software programs.

In general, we view activist investment positively. The perspective of many management teams has become too short term in nature, as they obsess about quarterly earnings and grab pay and power while they can. This can lead to lower funding levels for research and development and capital expenditures.

However, the effectiveness of activist involvement has to be viewed on a case-by-case basis. Sometimes, their suggestions are too short term in nature and resemble little more than a form of financial engineering (see https://www.bwfa.com/articles/financial-engineering-and-share-repurchases-2/ and https://www.bwfa.com/articles/watch-out-for-financial-shenanigans/). For example we think activist involvement has hurt deepwater drilling company Transocean. Carl Icahn urged the company to increase its dividend well above the amount recommended by management. Transocean carries considerable debt and the oil industry is cyclical. Given the impact of the recent oil price decline on the outlook for offshore drilling activity, the company would have been better off if it had retained more of its cash rather than giving in to Icahn.

At BWFA, we do not make investment decisions based on whether or not an activist is involved. In most cases where an activist is involved in a company we own, the involvement has come after we established a position. Those activists involved in our companies have generally made recommendations that were in tune with our long-term view and should ultimately prove beneficial to the future of these firms.

[i] Shares of Apple are currently on BWFA’s “Buy/Hold” list and are held in client accounts.